Benjamin Alire Sáenz will headline the LGBTQ+ Services Committee's 25th Anniversary Author Talk on Saturday, October 15, 2022. The event will take place from 2 to 4 pm at Tucson High in the Tech Mall, east of the cafeteria (400 North 2nd Avenue). This free, in-person event will include a reading from Sáenz, an interview, and a Q&A session with the audience. Attendees can also enjoy raffle prizes, a book signing, and other activities, including button making.

We are sooooooo excited for this event! So, in advance, we thought it'd be fun to look at some of the press coverage this critically-acclaimed author has received. 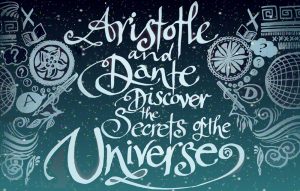 Benjamin Alire Sáenz writes prose that reads like poetry. In his work, he brings out the small, everyday details of life. Aristotle and Dante Discover the Secrets of the Universe, opens a new window filled a place in my heart that will always be full, no matter how empty anything ever gets. The sequel is just as wonderful, and I was delighted to spend more time with the characters.

Here’s a word of advice from The Inexplicable Logic of My Life, opens a new window:

- from Book Riot, "8 Authors That Make You Feel Taken Care Of" 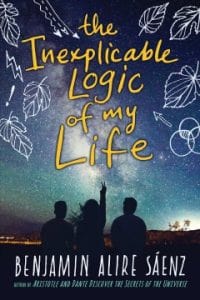 If you haven’t yet heard of Benjamin Alire Sáenz, a queer author from El Paso, it’s about time you do. The 57-year-old Sáenz has been penning novels and poems, along with painting, for 35 years. But his biggest hits have come with the recent publication of the Dante and Aristotle series, which recount the stories of two gay, young men who seek to develop their relationship along the Texas-Mexico border. The first book in the series, Aristotle and Dante Discover the Secrets of the Universe, has drawn international acclaim, earning top honors in the young adult category and being optioned as a movie starring Eva Longoria and Reese Gonzales.

-from The Texas Observer, "Benjamin Sáenz Knows Success Can Be 'As Fleeting as a Rainstorm in the Desert'"

Question: Activism, both national and local, is another through line in the book. Was that always there, or was it inspired by world or U.S. events?

Answer: I have been an activist in one form or another all my adult life. I wore a black armband to protest the Vietnam War when I was in high school. I supported the farmworkers boycotts in the late ’60s and early ’70s. In the ’80s I helped refugees from El Salvador file for political asylum by interviewing them, writing out their testimonies and translating their final applications. I have been involved in local political campaigns for progressive candidates and have done everything from writing television and radio ads to walking door to door. In my years as a professor, I advocated for changes in the curriculum and was involved in hiring more professors of color. Lately, I have joined local organizations to advocate for equality for the LGBTQ+ community and was on the committee that helped organize the local Women’s March. I have never been shy about speaking out on matters that I believed would make the world a better place.

-From Publishers Weekly, "An Interview with Benjamin Alire Sáenz"

What happens after you meet the love of your life? In 2012, Benjamin Alire Sáenz introduced us to Aristotle and Dante in the YA novel Aristotle and Dante Discover the Secrets of the Universe, making us fall in love with the two Mexican-American boys as they both discovered their sexuality and love for each other. The book slowly became a massive success, racking up award after award, opens a new window for its portrayal of two brown boys in 1987 in the borderlands of El Paso, Texas. Sáenz credits much of the book’s success to the fans: “They sold it to each other. It was sold mouth to mouth, hand to hand.”

-from Xtra Magazine, "Aristotle and Dante are back. Nine years later, author Sáenz delivers the sequel to a beloved queer YA love story"

"[Sáenz is] been a stellar writer from El Paso who has written soul-searching poetry, bilingual and bi-cultural children’s books, and beautifully crafted prose that crosses many borders. He is a writer’s writer with legions of fans across the country."