The Biblio Lotus team, opens a new window is proud to continue an interview series aimed at elevating Asian Americans and Pacific Islanders (AAPI) communities' voices and celebrating their culture. The interviewees are in different fields and from various backgrounds, but their dedication to AAPI histories and cultures helps form our diverse and dynamic community in Pima County.

Situated at 1288 W River Rd., opens a new window (La Cañada Dr. and River Rd.), the 15,000-square-foot Chinese Cultural Center serves the social and cultural needs of the Chinese residents living in Pima County. The contemporary structure honors Chinese tradition with symbolic design elements, such as circular moon gates and the use of the color red. The center’s main hallway displays quarterly rotating exhibits and items depicting the history of Tucson’s Chinese Americans.

Tina Liao worked as an administration officer at their family business. She became involved with the Tucson Chinese Cultural Center (TCCC) in 2005. Later she became a board member of Tucson Chinese Association (TCA). She has been volunteering and helping all events and activities for TCCC ever since.

What role has the TCCC played within the Chinese community and the Tucson community as a whole?

We've heard about some great programs held at the Center in the past. Can you talk about those programs?

TCCC has been here for about 15 years. Over the years we've established many programs. There are six major ones:

Chinese School, opens a new window—Tucson Chinese School has 70 years of history in Tucson. Mainly teaching language, we later added cultural classes such as Chinese calligraphy, Chinese painting, and Tai Chi classes. We regularly have 150-160 students, this year it is less people because of the pandemic. However, Chinese school is going on strongly—we have 105 this semester in the Fall of 2021.

Seniors Program—The program is for people over 55. People join as part of a paid membership. It runs on Thursdays every week. We normally have about 150-180 people. The activities we have are teaching them Tai Chi, playing Mahjong; they can do activities here all day. There are many non-Chinese people, too. This year the program ceased due to the pandemic.

Lion Dance, opens a new window—The Lion dance of TCCC plays a very important role in the communities. They are very actively involved with celebrations such as Chinese New Year events, Tucson Meet Yourself, and other corporate events. In addition to that, the Lion dance group is invited to go to Scottsdale for the Celebration there sometimes.

Local History Committee, opens a new window—the Committee focus on local Chinese history and has been doing it for about 12 years.

Red Thread Program, opens a new window—Red Thread is for the families that adopted children from China. They are all American families but they want their children to learn Chinese culture, and their identity. Red Thread was an independent organization. They decided to join the Cultural center as one of the programs about 10 years ago. Families came to the Center and they enjoyed the festivals like Moon festival, from which they learn about the history of the festival, and the story of mooncakes.

School Field Trips, opens a new window—Many local schools can arrange field trips with the Tucson Chinese cultural Center. Most are elementary and middle schools. From the field trip they get the idea of Chinese Culture. They would learn some history, and customs of China. For example, students can learn a little about Lion dance, Chinese calligraphies. They can learn what people do during Chinese New Year, what is lucky money, what color red stands for, etc.

How did you get involved with the Tucson Chinese cultural Center, and what do you feel most proud of? What do you love about Tucson?

I came to the U.S from China in 1988. My husband came here in 1987 to pursue his master’s degree. I joined him a few months later. We completed school and established our own business in Tucson.  In 2005 when TCCC was completed, I was invited to be MC for the center opening by Susan Chen, the director. I speak Cantonese, Mandarin, and English of course. That’s how I started to associate with the Center. Ever since, I hosted all events at the center in town, such as Chinese New Year, fundraising, and Moon festivals.

I was elected as president again in 2021. At a different time now, our mission is a little different. I have some thoughts and plans for my new presidency.

Being the new elected president, what are your new vision or new plans? 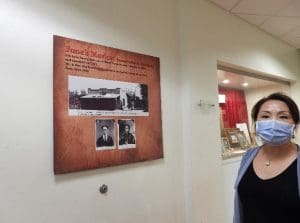 I will still maintain the educational and cultural activities. On top of that, I would like to focus on something new that was shifted by the pandemic. We need more understanding of Asian Americans, and of our many contributions to society. There is a hatred going on toward the Asian communities. I feel I need to do something, to let people know more about us.

Asian people are not just coming here to get something. We came here as early as 1875 in the Tucson area, and it was earlier in other places like California.

Over the years, Chinese immigrants here have contributed a lot to education, technology, and the economy. I want to take the lead to collect, organize, and record all the histories of the local Asian and Chinese community from the early days to today. I would like to create materials in Chinese and English, and print it into books so people living here can learn about the history and pass it on to our children.

Our older immigrants are getting older, the grandkids of railroad workers are seniors now. On the wall displayed here we have an honor wall of Asian people who served the army since the Civil War. Some of them died from the wars and some lived. 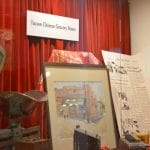 The idea came from the Superior Court of Pima County wanting to educate their staff of the local Chinese history, but not being able find anything. They reached out to TCCC and asked us to organize a class for them. 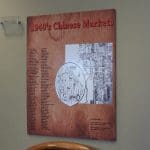 We worked with Robin Blackwood, the local Tucson Chinese history committee, and gave a one hour teaching. The lesson covered why Chinese came here, and what happened to them. We talked about how early Chinese people came to LA and other places and Tucson. They helped to build the railroad. We talked about what kind of hardships they have gone through. Then generations stayed. In Tucson there is a big history of local Chinese stores. When Tucson developed a population of over 30, 000 people, there were over 100 Chinese grocery stores. A lot of people don’t know this part of history. So this triggered the idea that we should have our own books telling the history of early Tucson Chinese.

What do you love about Tucson?

Tucson is a laid back area compared to some big cities such as LA or San Francisco. People here are generously nice and kind, and are more open-minded. I have lived here for 30 years and I always feel Tucson is a warm community. It is a good place to raise families. It is very hot in summer, but we got used to it.

What I love to do here—we get our business here and build our clientele. I like to volunteer at Tucson Chinese Cultural Center a lot, and also associate with some other groups such as Tucson Sino Tai Chi, Tucson Sino Dance, Tucson Sino Choir, Sino Ballroom, Sino Fashion, and a Gu Zheng group.

I am proud of who I am and where I am from. And I love to share my culture with people.