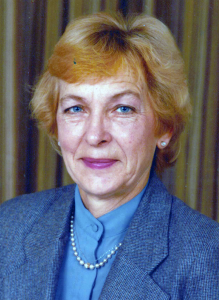 Iris O. Dewhirst (1927-1995) was born in Wamego, Kansas. She moved to Tucson in the late 1950s where she ran on the Republican ticket and was elected to serve on the Board of Supervisors in Pima County. During her term as a Supervisor, she was best known for helping to pass dozens of development-related ordinances that sought to protect Pima County's natural resources.

The Dewhirst-Catalina Library, opens a new window, a branch of the Pima County Public Library system located in Catalina, Arizona opened in 1989. The library is named after Iris O. Dewhirst.

Dewhirst received several awards, including Outstanding Citizen of Tucson (1974) for work on recycling, YWCA Women on the Move (1982) and a YWCA lifetime achievement award (1994.) She died in 1995 at age 68.