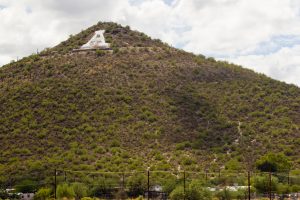 "A" Mountain is described as a "flat lying basalt flow" in the book Roadside Geology of Arizona by Halka Chronic, Page 61.

"Often called A Mountain because of the huge A white-washed annually by University of Arizona students, this peak has had many names. The Spanish name for it was Picacho del Centinela. It was called Picket Post Butte (Eckhoff, 1880) and Sentinel Peak because 'in early Tucson a sentinel station was erected and someone stationed there to give warning whenever enemies approached. It was used as a sentry station in the Civil War.' A ms. [sic] in the Huntington Library (1897) notes it as "a dark colored hill covered with rocks thrown up in titanic heaps called the Picacho de Metates." Because Warner Mill was at its base, it was also sometimes called Warner’s Mountain. The Papago name for it is Chuk Son, referring to the village formerly at its base." Source: Granger, Byrd Howell. Arizona's names: X marks the place. [Tucson, Ariz.?] : Falconer Pub. Co. c1983. Page 553.

The big “A” originated in 1914. The University of Arizona played a game against Pomona College in 1914 on Thanksgiving Day. One of the UA players noted that Pomona College had built a “P” on their hillside. One of the star football players, Albert Condon, suggested to his civil engineering class that UA should build an “A.” The work began in 1914. It took almost two years to complete.

First the site was cleared of cactus and shrubs; next the students dug trenches by hand for the foundation. The letter was built using black basalt rock quarried from the hillside. (Some of the remaining rocks went to build early homes at the base of the mountain and the “Rock wall” that surrounded the UA campus.)

The rocks were cemented together using mortar and water that was hauled by six-horse teams.

The “A” is 70 feet wide, 160 feet long and about 5 feet thick from its base. It was the first hillside letter built in Arizona.

The painting of the "A" white started on October 23, 1915 when the local university football team beat Cal State Pomona (7 to 3) and fans headed out to "A" mountain to paint.

The “A” on “A” Mountain was originally required to be white by city regulations. The “A” was painted red white and blue in September 2001 in response to the 9/11 terrorist attacks in New York City and Washington DC. It remained in those colors until briefly in March 2003 when it was painted black to protest the invasion of Iraq. It was quickly repainted red white and blue in support of the troops fighting overseas until April 2013 when it reverted back to white. In the spring of 2018 the A received a thin coat of red paint by supporters of the “Red for Ed” movement that advocated for higher pay for teachers in Arizona. In May 2020, A Mountain was painted blue to honor local health care workers on the front lines of the COVID-19 pandemic.

The big "A" has been painted green every year for St. Patrick's Day from 1993 on.

The Blue Key National Honorary and Tucson community members sponsor an “A Day.” On “A Day” incoming freshmen are bused up to paint the “A” before a UA home game. In 2010, “A Day” had been an 86 year old tradition.

"Photos: Tucson's 'A' Mountain through the years." Tucson.com.