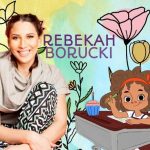 We're kicking off the summer with author and meditation guide, Rebekah Borucki, opens a new window!

We thought it'd be fun, as we lead up to the event, to introduce you to Rebekah! We hope you enjoy this Q&A with her!

We know what Zara would do if she were angry and wanted to go off on someone, but when a child enters a space where someone has made her feel as though she were less than or didn’t belong, what are some things Zara could do to maintain her sense of self-worth/dignity in that situation?

Something I instruct adults to do when their in moments of high-stress, self-doubt, or worry is to remind themselves of what's real. What's really happening in the moment? What's true right now? If someone is saying something hurtful to you, break it down. Get curious instead of judging yourself or them. Is what they're saying about you true? Why would this person say something hurtful? Is there something going on in their life that might be causing them to act unkindly toward you? Call on curiosity, empathy, and common sense. When we see things as they are, they often aren't as bad as we imagine.

In doing research on you for this interview, I came across an article where you discuss a car ride conversation you’d had with one of your little ones and the topic of differences between people had come up. Knowing that you value being upfront with children about the world we live in and feel grown-ups should guide them so they don’t have to struggle with questions on their own, do you plan on doing any anti-racist/allyship Zara books?

Zara's Big Messy Playdate, a new book in the "Big Messy" series that just released this spring, deals with friendship and non-violent conflict resolution. It offers a tool that teaches children to express and advocate for themselves while listening to "the other side" at the same time. It's a book about boundaries and healthy relationships, and I think knowing how to be a good friend and self-advocate is a big step in learning how to be a good ally to all types of folks.

There are plans for two more books in the series, one that will deal with differences and identity and another that will cover body autonomy and consent. Both will be co-written with experts on the topics, as was the newest Zara book, Zara's Big Messy Goodbye, that tells a story about grief and loss and was co-written with grief and trauma therapist, Gina Moffa, LCSW.