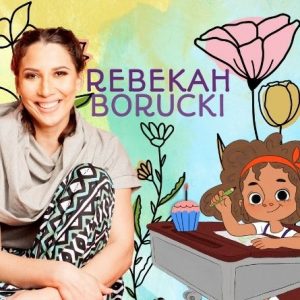 We're kicking off the summer with author and meditation guide, Rebekah Borucki, opens a new window!

We thought it'd be fun, as we lead up to the event, to introduce you to Rebekah! We hope you enjoy this Q&A with her!

How did you come to the decision to start a publishing house to give voice to the stories of the marginalized?

I actually have two publishing houses, one for children that I started because (to be totally transparent) I didn't want to have to wait to go the traditional route, and another one for adults that's in the middle of its launch right now. As for my children's book publishing company, Wheat Penny Press, it was born out of my own impatience. Children's books featuring marginalized characters are few and far between, and I wasn't going sit around and wait for my chance to be seen.

But the bigger story began in May 2018, when I attended a conference held by the publisher that published my first two books. It was a weekend assembly of their top authors and emerging talents. Walking into the room, I immediately noticed that I was one of only two people of color among more than 75 authors, editors, and company executives. When I brought up my concerns about the lack of diversity to the CEO at the end of the weekend, his reply--on stage and through a microphone--was, "You have to understand that we cater to an affluent audience." I was completely disillusioned and knew something had to change and fast. Meetings followed, and I was eventually made a mentor in a new initiative that was meant to center the voices of Black and brown authors. After almost a year in the program, it became clear to me that the publisher wasn't interested in making any real investment into the initiative or the hopeful authors it was attracting. With a heavy heart, I left my current contract and my position as a mentor behind in October 2020. Soon after, an old friend approached me about starting my own publishing house, and that's how Row House Publishing came to be. Row House will absorb Wheat Penny Press as its children's imprint later this year.

Was there something about that process that led to the recognition, “Hey, these marginalized adults were once kids. How can we reach these kids and give them the tools they need to grow up and become empowered adults willing to share their stories?”

Initially, I wrote my children's books as a love letter and offering to my seven-year-old self. These were the books I needed as a little girl who was struggling with family issues and her emotional health. Through sharing my story and the first book, Zara's Big Messy Day, I discovered that stories like those in my "Big Messy" book series are needed more than ever. I didn't set out to write a whole series or create a publishing house, but it quickly became a calling. I saw a need in my community and wanted to fill it.

Did that lead you to create the WPP Little Readers Big Change Initiative, adding yet another hyphen to your already impressive list of accomplishments?

As long as I've had an online presence, giving back has been part of it. There was no way I could write books for kids and not make them accessible for all kids. I grew up in poverty, and being poor should never be a reason that someone doesn't have access to the tools or education they need to be successful. The WPP Little Readers Big Change Initiative not only provides books to kids like me, we place authors in the classrooms that look like them and host free workshops to show them that they can be authors in their own right.