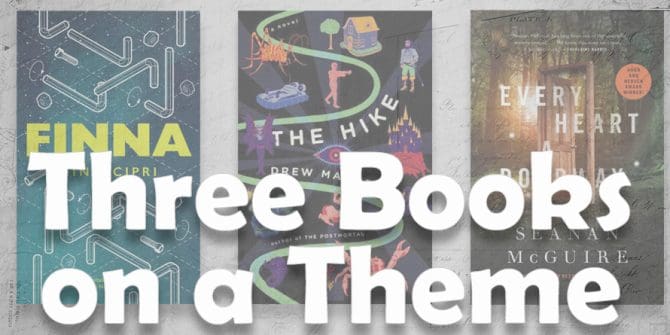 What is a multiverse? An opportunity to have three versions of Spider-Man in one movie (or many more in an animated one?) Is it something a red pill can reveal? Or is it just an old concept found in ancient myth and religious practice, but having a cool revival with movie CGI and quite possibly a desire to just escape Our Present Reality? The question has been explored in many ways. Stories of fairies whisking babies away, Alice going through a mirror or down a rabbit hole, and even a priest getting too many fumes in a Greek cave and having visions are all part of our collective stories.

Nino Cipri’s Finna explores the concept from a starting point of Where Did Grandma Go? after she got lost in a large chain store full of Swedish furniture. Two coworkers are assigned to look for her, and find themselves going through a wormhole into similar décor showrooms and frightening employee/denizens in what turns out to be a harrowing adventure with all the silliness and danger of an episode of Lost in Space or that Journey to the Center of the Earth movie with Pat Boone. Anyway, there is swashbuckling. And why wouldn’t there be?

Drew Magary’s The Hike is a bit like the grandmother’s side of things. Only in this case, the protagonist is just an everyday person who gets lost wandering near a hotel and finds himself changed repeatedly over the course of what turns out to be a test of some sort. There’s isn’t swashbuckling, but there is some time spent as a crab. As noted before, “a bit like”. As not noted before, this one is more absurd.

Every Heart a Doorway

Finally, there’s Seanan McGuire’s Every Heart a Doorway, which is the opener of a series called Wayward Children. In it, there’s a school for children who had adventures in other realms but can’t easily return to normal life after such experiences. It’s a trauma-based concept that takes what are usually such frivolous stories and treats them with a seriousness that isn’t common in such tales, especially those dealing with young people. Many found families are made, but home is the more difficult concept for these children.