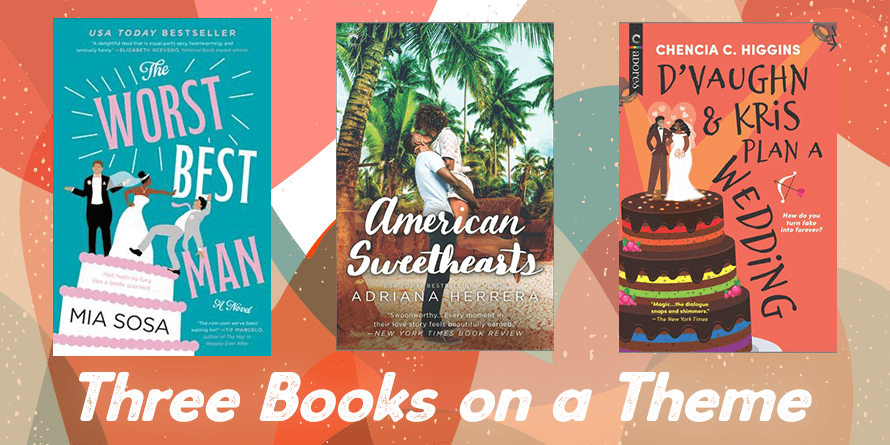 It’s Mes de la Cultura, so what better time to highlight a few books that center Latine people of African descent falling in love? Sometimes, that’s with other Latine people of African descent, and sometimes they end up falling for someone who isn’t. Either way, it’s always great to read stories about people who are often undercut in both the Black community and the Latine one, and especially when they get to fall in love!

Here are three books I’ve enjoyed recently where they get to stumble their way into love and keep that HEA going while they’re at it!

The first in a series, The Worst Best Man introduces us to a lovely Afro-Brazilian family who are here for each other no matter what. That doesn’t, unfortunately, extend to their wrong choices in life, and Lina’s supposed future brother-in-law is the one who ends up telling her that his brother doesn’t want to marry her.

And if you enjoy this delightful family, definitely check out The Wedding Crasher, the 2022 follow-up!

Adriana Herrera’s Dreamer series is a collection of books that stand alone, but are best read all together, so you can fall in love with every single member of this delightful found family of Carbbean friends living in New York. Eventually, though, you’ll make it to American Sweethearts, the series’s crowning finale.

Priscilla and Juan Pablo have been on-again off-again for years. They’re each other’s first loves, but sometimes love doesn’t fix everything. When they’re trapped together in the Dominican Republic for their friends’ wedding (friends we meet in an earlier book), they decide to try to figure out how to move forward with their lives, whether it’s by getting back together or moving on from each other. But they’re surrounded by friends who all Ship It, so they might have some help.

If you want to start at the beginning, the first is American Dreamer, but you can pick up any of them at any time!

(And if you’re interested in reading about an AfroLatina woman living in the past, check out Adriana’s historical romance, A Caribbean Heiress in Paris.)

D'Vaughn and Kris Plan A Wedding

D’Vaughn and Kris are both contestants on the reality show Instant I Do. What is that, you might ask? It’s a competition show where two strangers are paired together and have to convince their family and friends they’re engaged and getting married in six weeks. Their families have to help them plan their weddings! D’Vaughn wants to use the show to help her come out to her family, while Kris is actually hopeful of finding true love…and boosting her influencer status is a nice bonus. The two have immediate chemistry, but can they really pull off the long con on their families? And in the end, do they want to?

Bonus rec: It’s not the fun kind of romcom like the ones listed above, but if you want to explore the complicated history of being AfroLatine but also read a romance novel, An Unconditional Freedom by Alyssa Cole features an Afro-Cuban woman caught in the middle of the turmoil of the American Civil War, and she has to figure out where her true allegiances and beliefs lie.