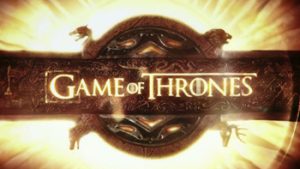 Missing Game of Thrones? We have a few more months' wait to find out what is going to happen in Westeros. While you wait, you might be interested to learn that many of our favorite Game of Thrones characters share similarities with Shakespeare's most memorable heroes, heroines, and villains. Of course, there is no writer who has not been influenced by Shakespeare and when you are writing a grand epic like the Song of Ice and Fire, the archetypes that Shakespeare wrote are bound to pop up. Here are my top picks of Game of Thrones characters and their Shakespearean counterparts. What do you think? Do you agree with my list? If not, who would you change and why? Who would you add?

Like Lady Macbeth, Cersei Lannister desires power. Her ambition knows no bounds and she will stop at nothing to get what she wants. What she wants is power and to be queen. Lady Macbeth is the driving force behind her husband Macbeth, and Cersei Lannister, while not controlling her husband Robert Baratheon, does take over and manipulate her sons once they become kings. In the end, Lady Macbeth goes mad and kills herself. We'll have to wait and see what happens with Cersei!

Iago is one of the worst villains in all of Shakespeare's plays. Through conniving, innuendo, and manipulation, he convinces Othello that his wife, Desdemona has been unfaithful. Iago drives Othello so mad with jealousy that the beleaguered husband kills Desdemona in her bed. Littlefinger is not much better! He manipulates everyone behind the scenes, from the Lannisters to Sansa Stark. He plants seeds of doubt and distrust in all of the major players in order to gain that power for himself. Littlefinger will stop at nothing, not even murder, to get what he wants.

I could not decide whether Robb Stark was more like Henry V or Julius Caesar, so I'll go with a little of both. Henry V was one of Shakespeare's historical plays and based on the real Henry V, one of England's most celebrated medieval kings. Henry was a charismatic king and war leader who led his men to fight the French against huge odds. Robb Stark (the King in the North) led the Northerners against the Lannisters; the odds were against Robb, but he was a good leader, his men loved him, so he gathered a large army. Unfortunately, like Julius Caesar, Robb was betrayed and murdered (stabbed) on a day when people were celebrating, and by people close to him.

I pegged Tyrion Lanniser as Richard III not for the way in which the reader/viewer sees him, but more for how the other characters see him. Richard III had a hunchback and it made him the object of scorn, ridicule, and disgust. Like Richard, the people in Tyrion's world mock him and hate him, not because of what he does or says but because of what he looks like. Richard ruthlessly murdered his nephews so that he could become king. Although Tyrion did not murder anyone to gain power, he did murder his own father! Richard III and Tyrion are both also intelligent and devious.

King Lear decided to hand over his power to his daughters, but in so doing he created distrust among the women and their husbands. They fought for power, destroying each other, and ultimately King Lear dies from grief over the death of one of his daughters. The name King Lear has become synonymous with being the father to ungrateful children. Tywin Lannister, while he does not die from grief over a daughter, does have ungrateful children who distrust and hate each other so much they end up nearly destroying one another. The Lannisters are always at each other's throats!

In Shakespeare's The Tempest, Caliban is the 'monster' who lives on the island in which the main character Prospero and his daughter land. Caliban only wants the interlopers to leave him and his island in peace, but they instead enslave him. Sandor Clegane (The Hound), like Caliban, is considered little more than a beast, The Hound, to the Lannisters and others in Westeros. They mistreat him and abuse him. Caliban schemes to kill Prospero for the way he is treated, and The Hound very much wants to kill Joffrey Baratheon for his cruelty.