Margaret Regan is the Library's most recent Writer in Residence. She is the author of The Death of Josseline: Immigration Stories from the Arizona Borderlands and Detained and Deported: Stories of Immigrant Families Under Fire. We're grateful to Margaret, and Beacon Press, for allowing us the opportunity to post an excerpt from The Death of Josseline, which Booklist called "brutally honest." 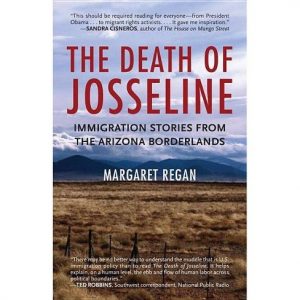 Josseline shivered as she stepped over the stones and ducked under the mesquites. She was in Arizona, land of heat and sun, but on this late-January day in 2008, it was cold and damp. The temperature was in the 50s, and the night before it had dropped to near freezing. A winter rain had fallen, and now the desert path was slippery and wet, even more treacherous than it had been before.

Josseline was seven miles north of the Mexican border, near the old ranching town of Arivaca, in prime Sonoran Desert. It was a wonderland of cactus and mesquite, beautiful but dangerous, with trails threading through isolated canyons and up and down hills studded with rocks. She had to get through this perilous place to get to her mother.

A little girl with a big name—Josseline Jamileth Hernández Quinteros—she was 5 feet tall and 100 pounds. At 14, young as she was, she had an important responsibility: It was her job to bring her little brother, age 10, safely to their mother in Los Angeles. The Hernández kids had never been away from El Salvador before, and already, they'd been traveling for weeks. Now they were almost there, just days away from their mother's embrace.

So far, everything had gone according to plan. Traveling with a group led by a coyote, they had slipped over the border from Mexico, near Sasabe, and had spent a couple of days picking their way through this strange desert, where spiky cacti clawed at the skin and the rocky trail blistered the feet. The coyote insisted on a fast pace. They still had a hike of 20 miles ahead of them, out to the northbound highway, Interstate 19, where their ride would meet them and take them deep into the United States.

Josseline pulled her two jackets closer in the cold. Underneath the jackets, she had on a tank top, better suited to Arizona's searing summers than its chilly winters. Over her jeans she’d pulled on a pair of sweatpants with the word "Hollywood" emblazoned on the rear. Josseline planned to have them on when she arrived in the land of movie stars.

She tried to pay attention to the twists and turns in the footpath, to obey the guide, to keep up with the group. But by the time they got to Cedar Canyon, she was lagging. She was beginning to feel sick. Maybe she'd swallowed some of the slimy green water that pools in the cow ponds dotting this ranch country. Whatever the reason, Josseline started vomiting. She crouched down and emptied her belly, retching again and again, then lay back on the ground. She was too weak to stand up, let alone hike this rollercoaster trail out to the road.

It was a problem. The group was on a strict schedule. They had that ride to catch, and the longer they lingered here, the more likely they'd be caught. The coyote had a decision to make, and this is the one he made: He would leave the young girl behind, alone in the desert. Her little brother cried and begged to stay with her. But Josseline was his big sister, and Josseline insisted that he go. As he recounted later, she told him, "Tú tienes que seguir a donde está Mamá." You have to keep going and get to Mom.

The other travelers grabbed the wailing boy and walked on, leaving his sister alone in the cold and dark. She had only her clothes to keep her warm. On her first night alone, the temperature dropped below freezing, to 29 degrees. By the weekend, when her brother arrived safely in Los Angeles and sounded the alarm, Arivaca had warmed up—to 37 degrees.