This article by Justine Hernandez was originally published in the Arizona Daily Star on Jan. 20, 2017. 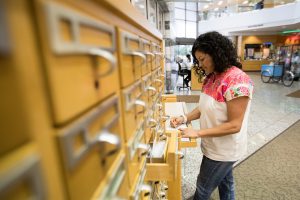 Tasked with writing about Pima County Public Library’s Seed Library, I called upon my muse, my little backyard garden, for some inspiration.

As always, my modest plot of soil and her verdant residents didn’t let me down. They got right to the heart of things, reminding me of both the generosity of plants, but also the great magnanimity of their human stewards.

It’s the first few days of fall as I write this, and the nearly-ready-to-harvest watermelons that I’ve been doting over for what feels like forever are almost ready to be freed from their twisting vines.

Once the melons confidently asserted that they were going to pull through the stress of Tucson’s summer heat, it’s made my morning journey out to the garden a little more exciting with each new day. I’ve been thumping them, observing them, talking to them, rolling them to their sides to inspect their yellowing underbelly (a sign—I’ve learned—of the sugars forming in the fruit). I pluck would-be pests from their developing rinds and have made sure the little plastic lid saucers I’ve placed beneath them are doing their job of protecting them from the unseen soil critters also eager to get at their flesh.

These watermelons, like many of the plants I tend to in my garden today, have become much more than the promise of momentary sweetness on my lips or an ephemeral burst of color and texture in my yard.

Don’t get me wrong, those things are also a magical part of the gardening experience. What’s more important to me, though, is the profound feeling of connectedness that comes from sowing seeds and growing plants shared by others.

Next month marks the fifth anniversary of the Pima County Public Library’s Seed Library. For five years, Pima County gardeners have embraced and cultivated a shared economy of seed saving, planting, and harvesting.

In that short time, gardeners—myself included—have toiled in our plots not as individuals, but as a community with a common narrative.

These watermelons I’m growing are just one example of how planting seeds can take on an added purpose. They were started from seeds that my wonderful, kind, and thoughtful neighbor, Janice, collected and carried with her from an especially sweet, orange-fleshed variety whose roots run deep in the soils of Oklahoma.

Watching the melon vines tendril, flower, and set fruit over these past months has reminded me how far-reaching and nourishing seed saving and sharing can be across our community.

Even the plants growing from seeds whose previous stewards I’ve never met, like the ones checked out from the Seed Library, carry the poignant message of community. It is a powerful thing to plant a seed that has been grown, nurtured, collected, and shared by another. It is about so much more than tending a garden. It is about becoming part of a tradition of passing on the riches of our agricultural heritage.

After just five short years, the Seed Library has so much to celebrate. We’ve made great strides from our first year, when we checked out just under 8,000 packets of seeds to Library cardholders, to today, when more than 26,000 packets make their way out in to the community annually!

Between 30 and 40 percent of the seeds that have made their way in and out of the Seed Library over the past five years have come from local folks just like you and me. When I think of all we’ve accomplished together, I beam with pride for the people of Pima County.
Another thing that fills me with pride is working for Pima County Public Library, a place where those in charge are not afraid to take a chance on a librarian’s wacky idea to steward seed saving and sharing.

It didn’t take much convincing at all for Library administration to agree that the resources of a public library can encompass a myriad things that enrich our lives and create pathways for our community to connect. You only have to hop on the Library’s website and online calendar to see that in action.

As the Seed Library celebrates this 5-year milestone, my fellow seed librarians and I invite you to check-out a packet (or 10!) of these open-pollinated seeds and join our community in growing ever more connected to our food and to one another.
We would love nothing more than for you to become part of our continuing story.

In 2014, Justine Hernandez was named a Library Journal Mover & Shaker for her work in starting the popular Seed Library program. A self-identified introvert, she loves to create opportunities for people to come together. Having grown up in Tucson, she waited years to become an adult, spread her wings, and get the heck out, but then discovered bicycling and fell in love with the city while exploring her side streets and backroads.