I was lured into the world of edible gardening by the tempting variety of free seeds available through our Seed Libraryopens a new window. After I observed several people donating okra seedsopens a new window (plant May through October) that they had harvested from their home gardens, I thought I might as well give it a try. 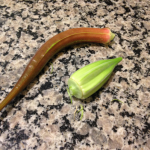 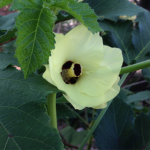 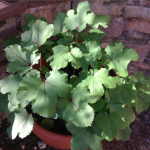 I selected a tall planter, in the hopes that I would be able to keep my crop away from the desert critters. And, to be honest, I was too lazy to dig and amend the “soil” in my backyard, which seems to be comprised of 25% rock.

I planted two seeds in each hole after soaking the seeds overnight, hoping that at least one of the seeds would sprout. I covered the planter with plastic to keep the soil moist during germination, watered, and hoped for the best.

Much to my surprise, a week later tiny sprouts were showing above the soil level. The number of sprouts doubled over the following week, and sure enough, more than one seed was sprouting from many of the planting holes - talk about creating your own problems! Since I had never grown anything from seed before, I couldn’t bring myself to pluck out half of the plants; I just let them be and figured each seedling could battle it out for dominance.

The okra plants were overall quite happy, although they couldn’t seem to handle the midday solar deluge of May and June in Tucson. I decided to move the planter under my mesquite tree in the backyard, where the okra would receive light shade. The plants thrived for several weeks but didn’t produce flowers. I wasn’t sure if this was due to overcrowding, or just the tender age of the plants.

At the beginning of July, a monsoon storm with nut-sized hail rampaged through the neighborhood and demolished many of my beloved okra plants. At least half had to be pulled out as a total loss.  The rest of the plants had badly shredded leaves. I learned two valuable lessons from this experience:

I left town later that week, fully expecting to come home to a planter full of dead okra plants.  Much to my surprise, upon my return I found the plants swiftly recovering! Added bonus:  one plant actually had an okra pod on it. Numerous pods followed over the summer, and my husband and I had homegrown okra for many meals.

Our findings on the varieties we grew: