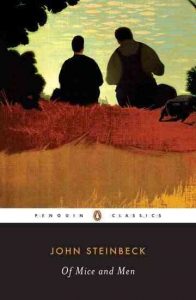 Since its publication in 1937, Of Mice and Men by John Steinbeck has been adapted into many movies and plays. It's a fast-paced story that is both compelling and heartbreaking. The novella opens your mind to the fact that it is very easy to have dreams and chase them, and gives a look behind the scenes to any dream becoming a reality.

Set during the Great Depression, this novella is a story of two outsiders trying to find their place in an unforgiving world where every decision or mistake counts. Lennie and George are a rather unlikely pair of friends-- George being short and scrawny and Lennie being huge and incredibly strong, although also mentally damaged. You find happiness in this unlikely pairing of friends, and Lennie's focus on the rabbits and their hope for the future. George tries to protect Lennie from the world, as Lennie's actions are easily misinterpreted, and also tries to protect the world from Lennie. But soon, their happy paradise gets turned into a nightmare with the introduction of some flawed characters such as Curley and Curley's wife. Easily intimidated by Lennie, it seems as though Curley's only focus in life is to destroy Lennie. Even with Slim being the voice of reason, it seems the odds always fall in Curley's favor.

At the beginning, I expected to read about the true friendship between Lennie and George, but what I got was something much more. This book is something that you have to read from beginning to end even with the snippets of cruelty hiding in between the pages. You find yourself wondering "Will Lennie ever get to care about the rabbits?" It may seem simple at first but it is truly great. Who said only long stories can make a change?

p.s. You can also find Of Mice and Men in our catalog as an ebook, downloadable audiobook , and DVD!