Two years ago, the Pima County Public Library was awarded a $100,000 planning grant from the MacArthur Foundation and the Institute of Museum and Library Sciences to design a community learning lab for Tucson’s youth. The Library brought together a group of teens to design a youth center here in Tucson.

This group, the Youth Design Team (YDT) has done extensive research, outreach, and documentation to clearly identify and solve how youth can feel more empowered and successful. One way that the YDT is hoping to achieve this is through the Rising Voices Youth Summit!

Rising Voices was a conference that will be held by youth and for youth, on Saturday, April 25, 2015 at Joel D. Valdez Main Library in the 101Space created for teens. This summit was based entirely on youth -- their experiences, their ideas, and their connections. Youth helped define the day by telling us their expectations as they arrived and actively interacting with other groups during presentations and discussions.

Heather, one of the YDT members, shares her experiences at Rising Voices below.

As I hastily knocked on the back door of the library at 8:10 am I was already nervous about the events of the day. What if no one showed up for the first Rising Voices Youth Summit? Could it be possible that the only people there would be me and the rest of the Youth Design Team? As these thoughts were running through my head, someone answered the door.

I walked in, ready to get to work...but where should I start? There was so much to do it was overwhelming and I felt lost. A surge of panic came over me as I talked to Phoebe, who was already at work. Meanwhile, I sat hopeless, frantically searching my mind trying to remember what I needed to do. Luckily, Katie and Amelia showed up, and I felt relieved again. We worked swiftly and efficiently, rearranging the 101Space to prepare for the event that we had put 3 months of work into. All the while, nervous images came to my head as the summit start time quickly approached. 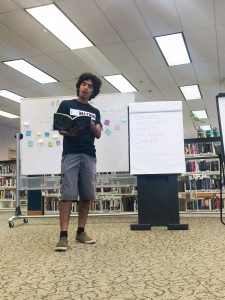 The excitement began when people started to file in. I felt butterflies, the good kind, and my heart raced. This. Is. Happening. I helped to sign people in, trying to get a feel for the type of people who were coming. Once the summit started, I felt the nerves kick in again...what if I am a horrible discussion facilitator, and I fail miserably? No, I told myself, this will be amazing, I just have to roll with it.

After the first discussion, that idea was validated. From that point on, I knew that this summit was going to be all we had imagined.

We all care about the same things

The teens there were interested and engaged, and the best part was that we were all working towards the same goal. It was the best feeling in the world to know that there were other people out there in our community that cared about the same things that my group and I care about. There were other people working towards the same goal, and now we had a way to connect with them, a way to bring what we had been working on for two years to the rest of the community.

I'm part of something that could change the world

But, for me, the most important thing was that I felt like I was a part of something. Something that had the power to create change, both in individuals and in the world. This realization fueled me for the rest of day, and as it advanced, I felt more excited than ever. When I led the discussion following the All About the Dough team’s presentation, I came to see how any group of youth, not just ones who had training and had worked together previously, could collaborate to address and solve a problem. It was like magic. No, it was out of this world. The ideas in my head were now proved, right in front of me, in real-time. 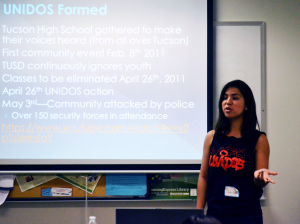 Of course, I was broken away from this trance by the sight of lunch because who doesn’t love food? Food is supposed to bring people together, and that is exactly what those wraps and sandwiches did. I was able to connect with the teens there on a more personal level, rather than just on an intellectual level. We bonded over strawberry Eegees-stained lips and the “small world” kind of connections.

In fact, I met two different people who had gone to my high school, and I didn’t even know it! After lunch it was more of the same beautiful magic sparked by the invigorating topic of youth voice in terms of starting your own business. The discussion that I had with the Changemakers from WILD High School was amazing and productive. To hear about the clothing line that they were creating was inspirational; it made me and everyone else in the room feel like they could do anything, no matter how big or challenging it was.

Bringing out the best in all of us

Towards the end of the day when everyone had used all of their brain power, we joined together for one last rendezvous...and it was worth it. With a more intimate group, we had a discussion that brought out the best ideas and thoughts in all of us. Soraya Simi, one of our guest ignite presenters, led us to understand how to bring out youth voice and power in ourselves, which rounded out the end to our successful and stimulating day.

As the clock read 3:30pm, I had to hurry out to make another event. The butterflies in my stomach started to flutter again, but this time they were butterflies of accomplishment and elation. The only thoughts that filled my head as the door to the library closed behind me were how Rising Voices had created a positive impact on me in a way that I had never expected.