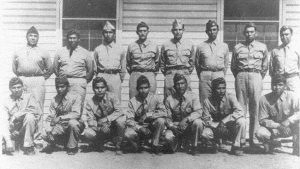 On August 7, 1942, U.S. Marines of the 1st Marine Division hit the beaches of Guadalcanal, Tulagi, and the Florida islands in the first land offensive against Japan. Of the 11,000 Marines who landed, 15 were Navajo Code Talkers. This was to be their inaugural test in battle—three months after they’d been initially sworn in at Fort Wingate, New Mexico on May 4, 1942. In those three months, the code talkers went through basic training, underwent extensive instruction in radio operation and message transmittal, and developed and memorized a code that not even other native Navajo speakers could decipher.

Despite the original Choctow Code Talkers’ successful deployment in France during World War I, the U.S. military was reluctant to use Native Americans in the transmission of messages of tactical sensitivity during World War II. This was because the Germans were infiltrating various American tribes after WWI and posing as art dealers, anthropologists and students in order to study their languages.

Ultimately, the speed and accuracy in which the Navajo Marine Code Talkers were able to transmit messages convinced many of the skeptics to support the program. They deployed to the Pacific Theater, while 14 Comanche Code Talkers and members of 16 other tribes went to fight in the European Theater with the Navy and Army.

The Code Talkers were so vital to the war that their assigned bodyguards had orders to kill them if captured. The six Code Talkers, during the five-week battle for Iwo Jima, sent over 800 messages without a single error. Their signal officer Major Howard Connor said, “Were it not for the Navajos, the Marines would never have taken Iwo Jima.” The Japanese were never able to break their code.

Despite their heroic service to our country, the efforts of the 400 Navajo Marines remained classified until 1968. The government prohibited them from talking about their unique contributions to anyone, including their families. The public remained ignorant of the dedication and sacrifices of these exceptional men for another 23 years.

The irony lies in the fact that these courageous Americans were not officially recognized, nor were they granted the right to vote in all fifty states until 1962—17 years after the end of the war. Incredulously, despite their origins and over a hundred years of service to this country, including under George Washington in the Revolutionary War, they could not claim American Citizenship until 1924.

Even though, as of August 2019, there are only five surviving Code Talkers of the 400 plus who served, we have an opportunity every day to remember their amazing sacrifice for our country. Chester Nez, who died in 2014 and was the last remaining of the original 29 Navajo Code Talkers said:

“I reminded myself that my Navajo people had always been warriors, protectors. In that, there was honor. I would concentrate on being a warrior and protecting my homeland.”