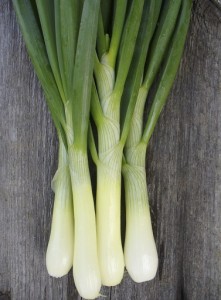 Planting: Unlike onions, which die back in cool weather, leeks are winter-hardy. Sow in rows 12 inches apart and ½ inch deep in a sunny spot. Thin a month later, leaving 6 inches in between. Germinates in 14 days.

Harvesting: Instead of producing a bulb, leeks produce a long stem of edible bundled leaves with many culinary purposes. The mild, white swollen base is typically eaten, though the green leaves are also delicious. Harvest when white portions are about 1 ½ inches in diameter.

Seed Saving: Leeks are biennials. Save seeds from second year plants. The seed head rests on a tall stem. As they dry, they shatter and  release seeds, so catch them before this happens. When you can see the seeds blacken within the drying flowers, cut the stem off and place upside down in a pillowcase indoors for 3 weeks to dry. Alternatively, lay on a screen to dry and rub, thresh, or flail to remove seeds. Winnow and sieve seeds gently

In a skillet, heat the oil and cook the leeks over medium heat for 20-30 minutes, stirring often, or until very soft. Set the oven at 375°. Tip the leeks into a strainer and press out the excess moisture. Set aside.

Put the potato into a medium saucepan and add a pinch of salt and water to cover it. Bring to a boil, lower the heat, and simmer the potato for 15 minutes, or until tender. On a plate with a fork, lightly mash the potato and transfer it to a large bowl. Stir in the eggs, cheese, salt, pepper, and leeks. Add enough olive oil to a deep 9-inch pie pan to make a thin film on the bottom and sides. Set the dish in the oven and leave it for 3 minutes, or until the oil is very hot. Carefully spoon the frittata mixtures into the pie pan and press it with the back of a spoon. Bake for 45 to 50 minutes, or until the edges are golden brown and the custard is set in the middle. Cut the frittata into wedges and serve hot or at room temperature. Serve with warm, crusty bread and tomato slices.

Source:  The Way we Cook: Recipes from the New American Kitchen (2003) by Sheryl  Julian & Julie Riven