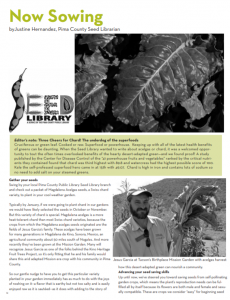 Three Cheers for Chard! The underdog of the superfoods

Cruciferous or green leaf. Cooked or raw. Superfood or powerhouse. Keeping up with all of the latest health benefits of greens can be overwhelming. When the Seed Library wanted to write about acelgas or chard, it was a welcomed opportunity to tout the often times overlooked benefits of the hearty desert-adapted green—and we found proof!

A study published by the Center for Disease Control of the “41 powerhouse fruits and vegetables” ranked by the critical nutrients they contained found that chard was third highest with 89.8 and watercress taking the lead with a perfect 100.  Kale the self-professed superfood hero came in at 15 with 49.07. Chard is high in iron and contains lots of sodium, so no need to add salt on your steamed greens.

Recipe: Tunisian Soup with Chard and Egg Noodles - You can substitute chickpeas for Tohono O’odham peas.

Swing by your local Pima County Public Library Seed Library branch and check-out a packet of Magdalena Acelgas seeds, a Swiss chard variety, to plant in your cool-weather garden.

Typically by January, if we were going to plant chard in our gardens we would have likely gotten the seeds our soils in October or November. But this variety of chard is special. Magdalena acelgas are a more heat-tolerant chard than most Swiss chard varieties, that’s because the crops from which the Magdalena acelgas seeds originated have been grown in the fields of Jesus Garcia’s family for many generations in Magdalena de Kino, Sonora, Mexico, an agricultural community about 50 miles south of Nogales and more recently they’ve been grown at the Mission Garden.

Many will recognize Jesus Garcia as one of the folks behind the Kino Heritage Fruit Trees Project, so it’s only fitting that he and his family would share this arid-adapted Mission-era crop with his community in Pima County. So our gentle nudge to have you to get this particular variety planted in your garden asap has as much to do with the joys of noshing on it (a flavor that is earthy but not too salty and is easily enjoyed raw as it is sautéed) as it does with adding to the story of how this desert-adapted green can nourish a community.

Up until now, we’ve steered you toward saving seeds from self-fertile, self-pollinating garden crops, which means the plant’s reproduction needs can be fulfilled all by itself because its flowers are both male and female and sexually compatible. These are crops we consider “easy” for beginning seed savers because they are less likely to be pollinated by another plant variety within that species.

Chards, on the other hand, are considered an “advanced” seed saving crop because they rely on wind to transfer their teeny pollen from one plant to another, so any plants within the same species (Beta vulgaris) that is flowering at the same time and within a certain distance will cross-pollinate with one another.  The minimum recommended distance between flowering Beta vulgaris varieties to prevent cross-pollination is 800 feet, these microscopic pollen really can move! What does this mean for you, the seed saver? It just means you’ll want to plan ahead a little and take certain precautions to prevent cross-pollination.

All chard varieties are in the species Beta vulgaris. Beets also belong to the species Beta vulgaris. Beets are essentially chard that were bred by our agriCultural forebearers to develop an edible root that stored well over the cold winters in pre-refrigeration Europe. If you’re planting beets and chard in your garden during the same season and are committed to saving seed from your crop--in this case chard--you’ll want to keep the beets from flowering so they don’t cross-pollinate with the flowering chard. This is actually easier than it might seem, as most gardeners are harvesting their beets well before they send up their flower stalks, which is usually when the temperatures warm up.

Beets and chard are also biennial, meaning they basically have two growing phases: their edible phase and then their reproductive phase. These phases or seasons are linked together by a necessary period of cold called vernalization. Vernalization triggers the plant to enter its reproductive stage which will eventually lead to the flowering of the plant.

Directly sow your Magdalena acelgas seeds about 2" apart and ½" deep. What we know as chard or beet seeds are actually the dried, indehiscent fruits that contain up to 5 seeds, this necessitates that you thin out your seedlings to about 4-6" apart. As you sow your seeds, think about how many plants you’ll want for edible harvests and how many you’ll need to keep for saving healthy, viable seed. The minimum number of plants to keep for seed saving is 5, but if you have space, more is better as it increases the genetic variability.

A quick note on space -- seed saving can be a garden-space hog and it can also leave your garden looking more like neglect rather than the well-tended and verdant spaces we equate with a hearty garden. But, if you want to be rewarded with not only the gift of seeds but also that of a deeper connection to the cycle of life in your garden, you have to acquiesce to the mess.

As you harvest your Magdalena acelgas for food, some harvesting of the greens from the plants you intend to save seed from is okay also, but no more than 25% of the leaves.  Be strategic in which plants you choose to harvest completely so as to leave roughly 2 feet between the plants that will remain for seed.

The warmer temps of late spring will signal reproduction for the remaining acelgas in your garden, with each plant sending up a flower spike which will sprout dozens of tentacle-like stalks along its main spike; these stalks are where the flowers will form. The flowers aren’t showy but they are plentiful as they stretch along the whole length of the stalk. As the flowers begin to set into the seed-bearing fruit we think of as the seed, they take on the look of little green knots.

The seed-bearing fruits will continue their maturation and go from green to light brown starting from the base of the stalk and progressing outward. At this point you can harvest the brown, mature seed daily, or wait for the whole plant to be about ⅔ brown and cut stalks at the soil line, keeping seed heads bagged to collect any that shatter as they continue to dry. Keep the drying stalks in a cool, dry place for a week or two until completely dry.

These little dudes are spiky, so unless you have heavily calloused hands, we suggest you glove-up when you drag your hand along the individual stalks to strip the seeds off. If you have an abundant harvest, this method might feel too time-consuming. In that case, you can opt to thresh your dried plants in a plastic tub. After you’ve threshed and discarded the more obvious sticks and plant debris you can borrow seed cleaning screens from the Main Library and further clean the chaff from the seeds.

Store completely dry seeds in an envelope, baggie, or jar in your cool, dark, and dry space.

More than anything, we hope your seed saving adventures are full of learning and fun. If you are successful in saving seed, we invite you to share the fruits of your labors with friends, neighbors, and of course, the PCPL Seed Library!

Get out and attend one of the gardening or seed saving programs happening at the public library or the Community Food Bank of Southern Arizona. And if you can’t make it to a program, check-out one of the many, beginner-friendly books on gardening and seed saving available at the library.

Visit the Seed Library for more articles and tips.