There are Wampanoag interpreters at the Plimoth Plantation site in Plymouth, Massachusetts. They maintain a native homesite on what was once tribal lands.

These interpreters host visitors in traditional gathering places and instruct on the ways in which the pre-settler Wampanoag people might have gathered and grown food, gathered for meals and other socializing, used animal hides and other products of the land to make clothing and tools, and interacted with the new arrivals. Unlike those at the Plimoth site, they do not act in the role of 17th-century people. Here is some great information about the Homesite from the Plimoth website.

An Indian College used to stand on the ground that is now Harvard Yard. The first known indigenous person to graduate from Harvard College was Caleb Chesshahteaumuck, in 1665, from what is now known as Martha's Vineyard. The other three known attendees of the Indian College never made it to graduation for various reasons. There were no known Wampanoag attendees at Harvard between 1665 and 2008.

There is a plaque in Plymouth that was dedicated in 1999. It perpetuates the memory of genocide and other crimes against American Indians. (The September 2001 issue of Cobblestone provides a great point of view on several aspects of Thanksgiving and the Pilgrim settlement in a child-friendly package.) 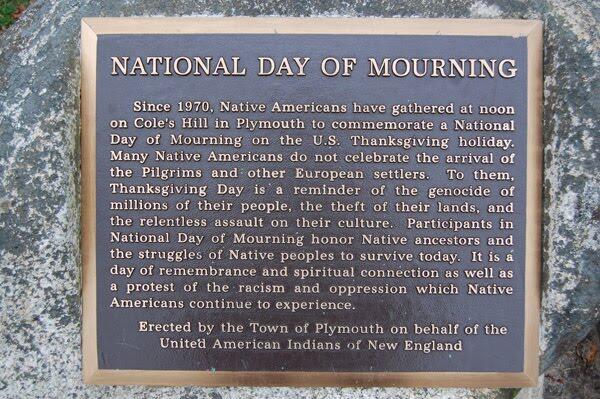 “After the Mayflower”, a segment of the We Shall Remain series about American Indian heritage and tradition from pre-colonial periods to the time the documentary was produced, is a good resource for what we know of the events following the harvest celebration of 1621 beyond what was recorded by Plimoth leader William Bradford, opens a new window.