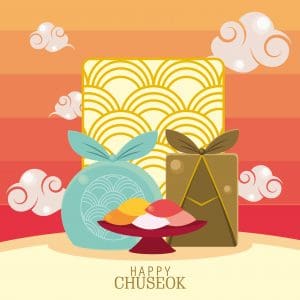 Mid-Autumn Festival, or Moon Festival, is one of the most celebrated festivals in Asia. A lot of people may have heard about it because of mooncakes or lanterns, which are some traditions of Chinese celebration. However, people from other countries in Asia would also celebrate Mid-Autumn Festival, for example, Korean, Japanese, Vietnamese, Singaporean, Malaysian, Indonesian and Cambodian.

In this Biblio Lotus, opens a new window blog series, we will introduce the history, traditions and fun facts of this festival in several Asian countries.

The Mid-Autumn Festival in Korea is call 추석 (choo-seok). This means “autumn eve”. The other less common name for the holiday is 한가위 (han-gah-wi). Koreans travel to their hometowns during this holiday. If they do not live close by, this can mean a very long drive! Sometimes the traffic is so slow that people get out of their cars on the freeway to stretch their legs while they are still in the car lane! This is one of the only times of the year that Seoul is empty. It can feel very strange to walk down the streets of Seoul during Chuseok. Even the subway cars are empty! 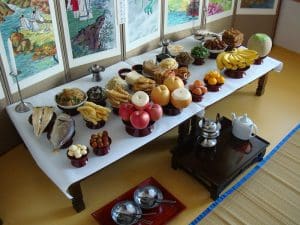 On the morning of Chuseok, the family sets up a table with lots of food. Traditional foods that are prepared are fruits, fish, soup, rice cakes, noodles, ribs, and fried foods. There is generally an order to how the food is placed on the table, which can vary by family and region. A screen is placed behind the table. The utensils, glasses, and songpyeon rice cakes are placed at the back of the table, near the screen. The next row has fried pancakes, meat, and fish. These are the main dishes. Soups come after this, closer to the front. After this comes dried fish and seasoned vegetable side dishes. The front row is for fruits and desserts.

Culture Fact: It is considered rude to stick chopsticks directly up in a bowl of rice because it looks like incense for the dead. 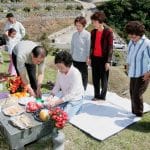 Sometimes, photos of relatives that have passed away recently are displayed on the table, along with their names written on sheets of paper. The family then bows twice in front of the table. These are big bows where you put your forehead to the floor, which shows a lot of respect! This process is called 차례 (cha-lye). Afterwards, the paper with the names of the deceased relatives is burned and taken outside.

After bowing, the family takes some of the food off of the table to eat for breakfast. Afterwards, the family visits the graves of their ancestors in their hometown and cleans up the grave to show respect, which is known as 성묘 (seong-myo).

Songpyeon 송편 are special rice cakes that are made around Chuseok. Song means pine in Korean. As the name suggests, pine needles are one of the key ingredients in the rice cakes. They are steamed with pine needles, which creates a wonderful aroma. Inside the Songpyeon are various fillings. Some have beans, others ground sesame seeds or peanuts. Honey is mixed with the fillings to create a wonderful, slightly-sweet flavor.

Make it! Recipe for Songpyeon from Kimchimari, opens a new window.

Japchae 잡채 is a dish made with sweet potato starch noodles, a variety of vegetable, and some mushrooms. The most common vegetables added to japchae are carrots, spinach, green onions, and red peppers. You can try different vegetables depending on your tastes. If you are not a vegetarian or vegan, you can also add meat and egg to your japchae.

Make it! Recipe for japchae from My Korean Kitchen, opens a new window.

Jeon 전 are savory fried pancakes. There are many different types of jeon, so we will look at some common ones that are eaten at Chuseok.

Make it! Recipe for kimchijeon from Maangchi, opens a new window.

Check out this Story Sketch, opens a new window we have on our Kids YouTube Channel about making kimchijeon!

Make it! Recipe for pajeon from Maangchi, opens a new window.

Three-colored namul 삼색나물 is a type of banchan or side dish in Korean cuisine. The three colors are white, brown, and green. The white is bellflower root, the brown is fernbrake, and the green is spinach.

Make it! Recipe for Three-colored namul from Nan the House Chef, opens a new window.

Check out Korean cookbooks at your library!

Tucson is blessed with some excellent Korean restaurants, but what if you want to try cooking Korean food at home? Here are some cookbooks and websites that we recommend.

We Recommend: Korean restaurants in Tucson