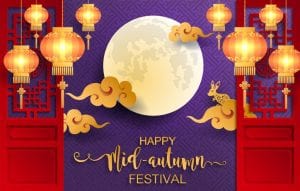 Mid-Autumn Festival, or Moon Festival, is one of the most celebrated festivals in Asia. A lot of people may have heard about it because of mooncakes or lanterns, which are some traditions of Chinese celebration. However, people from other countries in Asia would also celebrate Mid-Autumn Festival, for example, Korean, Japanese, Vietnamese, Singaporean, Malaysian, Indonesian and Cambodian.

In this Biblio Lotus, opens a new window blog series, we will introduce the history, traditions and fun facts of this festival in several Asian countries.

When I was in my hometown, Mid-Autumn Festival was all about eating delicious mooncakes and begging my parents to buy me a pretty lantern. Only when I left my hometown to study, I finally got to understand that, no matter how yummy a mooncake or how pretty a lantern is, the essence of this festival is about being with your family. Looking at the full moon and thinking about the family far away who might be looking at the same moon can briefly console the heart. Just like what the famous Chinese poet Li Bai, opens a new window has written:

Before my bed a pool of light,

I wonder if it's frost aground.

Looking up, I find the moon bright;

Traditions and myths surrounding the festival are formed around these concepts. Although traditions have changed over time due to changes in technology, science, economy, culture, and religion, it's always been about being together.

Mooncakes are traditional Chinese pastries eaten to celebrate the Mid-Autumn Festival. They represent happiness and prosperity. Here’s a story of mooncakes, opens a new window: during the Yuan dynasty (A.D.1280-1368) China was ruled by the Mongolian people. Leaders from the preceding Song dynasty (A.D.960-1280) were unhappy at submitting to foreign rule and set how to coordinate the rebellion without it being discovered. The leaders of the rebellion, knowing that the Moon Festival was drawing near, ordered the making of special cakes. Baked into each moon cake was a message with the outline of the attack. On the night of the Moon Festival, the rebels successfully attacked and overthrew the government. What followed was the establishment of the Ming dynasty (A.D. 1368-1644). Today many people may not remember this story, but would enjoy mooncakes no less.

Mooncakes are a special treat every year during this season. You can buy or make mooncakes, and there are variety of styles. The main ones are Cantonese style, Su Zhou style and snowy mooncakes. The fillings are also versatile such as lotus paste with egg yolk, sweet beans, and different kinds of mixed nuts.

Mooncakes are very rich. The process can be complicated but it is doable. For example, Cantonese style mooncakes need to be made ahead of time with inverted sugar syrup—some people substitute it with honey. But I think making your own syrup is better. You can buy the mooncake molds online. When these homemade mooncakes came out nice and pretty, you feel very accomplished! 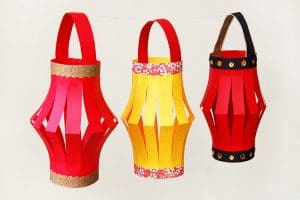 In addition to appreciating the moon and eating mooncakes, opens a new window, there is actually a very interesting custom in China—lighting lanterns. In ancient times, lanterns were used as lighting tools, i.e. a traditional lamp; nowadays, lanterns have become crafts and ornamentals and people light the Mid-Autumn Festival lanterns to symbolize family reunion and to pray for good fortune. As early as the Song Dynasty, opens a new window (960 - 1279), there was a Mid-Autumn Festival custom of floating lanterns in the river. Now, appreciating and playing with lanterns, opens a new window are still welcomed by many people.

The Shadow in the Moon