In this blog series, we're happy to introduce you to members of the Library's LGBTQ+ Services Committee. Today, meet Jessica P. (she/her/hers), who says, "My hope for future generations is to have so much representation for any identity they might come up with that they’re swallowed by it, not grasping." 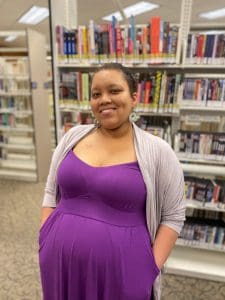 If you could be a superhero, who would you be?

This is wildly niche, but there’s a recurring sketch character on A Black Lady Sketch Show named Trinity who uses the fact that nobody actually notices her to be a super spy. Sometimes, it backfires, but I am both nosy and awkward so to have the ability to be in the know but not be noticed? Ideal.

If you could be any LGBTQ+ character, who would you be and why? 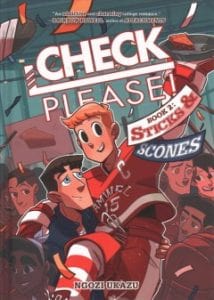 That’s hard! Bitty from Check, Please! Maybe? I don’t particularly care about the hockey, but to be able to bake that well—I love baked goods! But I mostly rely on other people to make them. Also, he’s just such a delightful person? Everything about him (except the constant need to overshare on Twitter) is the complete opposite of me, which would be interesting to experience…for just a little bit.

If you could send one message to LGBTQ+ people in our community, what would it be?

The vocal minority is loud and terrible, but there are so many folks in our corner. And no matter what, the library is a place for us.

What are your hopes for future generations of LGBTQ+ youth?

The biggest hope I have for future generations is the ability to openly and happily explore their own identities and experiences, and to have so much representation for any identity they might come up with that they’re swallowed by it, not grasping.

Is there an LGBTQ+ activist who most inspires you? If so, who is it and why?

Da’Shaun Harrison strives to live as their truest self, and it’s always an inspiration to see. They write and speak about not only LGBTQ+ topics, but the intersection between queerness, Blackness, fatness, and disability. They’re not afraid to be angry and loud, because there are some things you need to be angry and loud about. But they’re also all about presenting themself as a desirable person who also should be able to express their own desire, and it’s totally empowering every time I see them, even if it’s just a photo on Twitter.

What is your favorite color in the LGBTQ+ Pride Flag and why? 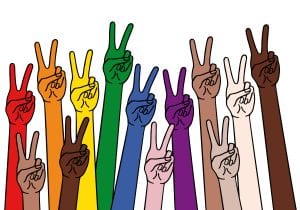 Purple. Because I’m a queen.

The purple in the Pride flag represents the soul, or the spirit. It’s the core of the body and the mind, and also couldn’t exist without other colors on the rainbow. It’s the ultimate color of both independence and connection.

For how long have you been a member of the committee?

Why did you decide to join?

I initially joined in the hope of finding a community in the workplace. I thought it might also be helpful to get to know what the library’s point of view might be on people within the LGBTQ+ family. I stayed because the team was actively working to ensure an inviting and inclusive environment not only for staff, but for the community we serve. 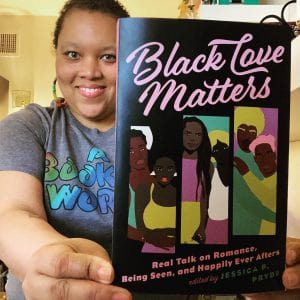 What do you love most about your work on the committee?

Imposing my bookish will on others, of course!

As the person who introduced the concept of the Rainbow Reads Book Club to the team, it’s sort of my baby, and I love being able to read beyond my comfort zone and introduce those books to a new batch of readers—and also share a love of reading and a welcoming space with members of the LGBTQ+ community at large. Every new attendee at Rainbow Reads makes my heart grow just a little bit bigger.

What you are currently reading/recently read and what are some of your favorite books?

I’m currently listening to A Lady for a Duke by Alexis Hall, which is fantastic and—while incredibly angsty—so wonderful.

Some of my favorites??? Why would you do this to me? Okay, here goes...

And of course, my favorite book to ever put together: