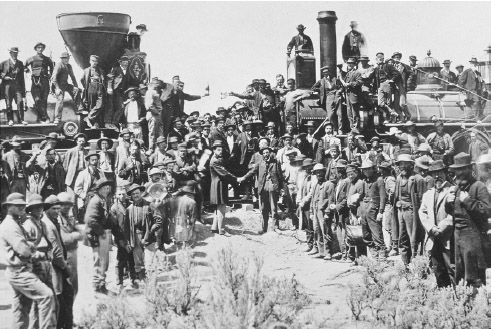 150 years ago, at Promontory Point, Utah, California Governor Leland Stanford, opens a new window (who was also President of the Central Pacific Railroad, because that’s not shady) struck the final spike in the Pacific Railroad to connect the Union Pacific and Central Pacific Railroads, whose joining made it possible for Americans to travel from coast to coast with far less potential for danger than they could in wagon trains. (Obviously he didn’t actually hammer the thing in; some poorly-paid rail worker did that.)(Okay, it was actually the chief engineers of each railroad.)

If you’ve watched Hell on Wheels, you might have a basic understanding of how the building of the Transcontinental Railroad went before, during and after the Civil War. There were multiple lines being built, contributing to the thousands (eventually tens of thousands) of miles of railroad track spread across the country—up and down the east coast, and across the midwest. When the idea was first proposed, for the sake of ease of trade, the concept didn’t go far. However, when the Gold Rush hit in 1848, there was a much larger push to complete a quick and safe conduit out west. Think about what the options were:

At the time those traveling to the West Coast had three options, each of which took about six months and was extremely dangerous. To go overland a traveler took a train to Omaha and then traveled by stagecoach through the plains of the Midwest and over the Rocky Mountains. The coaches were vulnerable to raids by Sioux and Cheyenne peoples while crossing the plains and to attacks by animals in the mountains. Another option was to sail around the southern tip of South America, but this trip was expensive, and the overcrowded ships were subject to attacks by pirates. The third option was to travel by boat to Panama, cross the isthmus by foot or by stagecoach, and then sail to San Francisco. However, much of the journey through Panama was through dense jungle, and travelers ran the risk of dying of fever. ("Transcontinental Railroad,"  Gale Encyclopedia of US Economic History. US History in Context)

People made it to California, of course, but not in a timely or fun way. Thus, a transcontinental railroad. Now, there was just the choice of where to put it, which caused more tension...this time between the North and the South. Not only would populations and industry boom around a railroad, but the question of slavery was never far from anyone’s minds.

But then, hey, all those southern Congressmen were now gone, being members of the Confederate States of America, opens a new window, and the remaining Congress could vote in a Pacific Railroad Act and decide where to put it.

(I’ll admit, I’ve always wondered why the railroad went through those cold, horrid parts of the country when there was flat, easier land to the south, but of course it’s because that was the best way to thwart the South. Cool cool.) 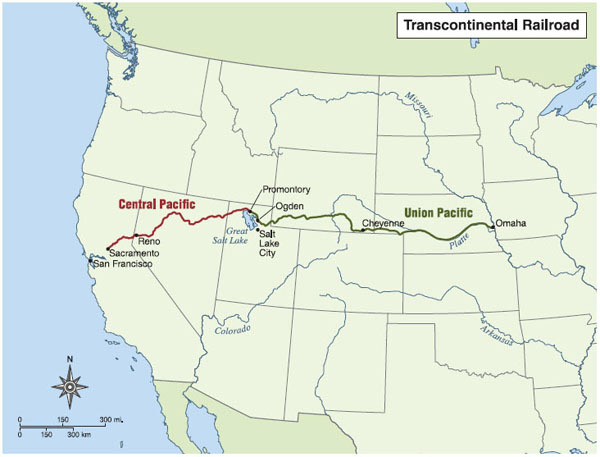 The work to build the railroad from both directions—west from Nebraska and east from California—was mostly done by Chinese immigrants, free black men, and poor white immigrants, mostly Irish. Work groups had their own ecosystems as they plotted their course, and more than just those who worked on the railroad themselves traveled east or west with them.

Honestly, it’s amazing what people could do in this country before the invention of the Interstate.

The ceremony at Promontory Point commemorated the meeting of these groups in one place, and was attended by all kinds of bigwigs and wealthy Californians. More than one golden spike was presented by the states involved in the project, and even a silver one. Speeches were made, champagne bottles were smashed, and the West was open for business.

It was a turning point for white Americans, who had been looking to escape the more brutal climate (natural and otherwise) in the East. It was also a turning point for American relations with the various Western tribal groups, unfortunately; the “public land” that the United States sold to railway companies to build on didn't always belong to the United States, opens a new window, but the sovereign nations living on those lands couldn’t do much more than they already were—once the heavily armed, heavily guarded railroad industry moved their way. The groups who had already agreed to occupy smaller tracts of land were moved further to the north and south, and others were marched to areas hundreds of miles away from their original homes.

Interested in more? Check out these various media things:

Bury My Heart at Wounded Knee

Happy Golden Spike day! When was the last time you rode a train somewhere?