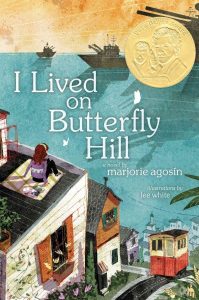 I Lived on Butterfly Hill by Marjorie Agosín is a touching middle school novel (translation from Spanish), set in Valparaíso Chile during the 1970’s. Eleven-year-old Celeste Marconi, a budding writer grows up midst a fictional military coup, similar to the real one by General Pinochet.

The political coup upsets Celeste’s world. First her friend Lucila disappears, then her doctor parents go into hiding, finally she is sent by her abuela to live in the US with her expatriate aunt. Night time curfews, banned books and people being disappeared are all events reminiscent of Hitler’s Third Reich, from which Celeste’s abuela escaped 30 years prior.

No sooner does Celeste come to grips with life in exile (new language, new climate, new friends), she returns home to face changes there. Will she ever be reunited with her parents and her close friend Lucila? So much is uncertain.

Some of the highlights for me in this translation are Celeste’s multilingualism, the integrated use of Spanish in the text, the close-knit family (three generations under one roof), the close-knit friends, and the close-knit neighborhood. Although connections can cause pain (where is Lucila, for instance), the stability they offer outweighs that pain. Celeste/Agosín writes: “People like to think of themselves as individuals. But…(w)e know the meaning of solidarity. We understand that what happens to a neighbor also happens to us”.

For more information about General Pinochet and about Chile, check out this article that's free with your library cards, by using World Book Kids in our E-Library.

This book also won a Pura Belpre award, which is awarded annually to a Latino/Latina writer and illustrator for a work of children’s literature that best celebrates the Latino cultural experience. See more award winners here!