Meet Leah, a library card collector all the way from The Empire State! Leah likes to collect things—coins, erasers, keychains, to name a few—but one thing in particular that has us talking is her collection of library cards! We met Leah a few months ago when she emailed Ask a Librarian. Her request was simple—all she asked for was a library card to add to her collection! We were, of course, intrigued, so decided to check in with Leah about her collection and other fun things. 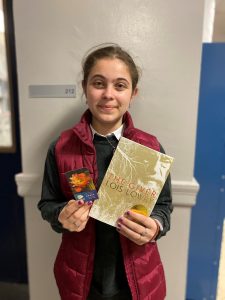 First things first, how many library cards do you have?

What inspired you to start this project?

I’ve seen videos of people collecting things by asking people for them, like collecting flags by reaching out to embassies. I wanted to collect something in this way, something that I can’t collect just by buying online. And I realized that library cards would be a perfect things for this. 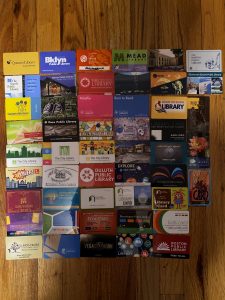 Where do you store them?

Currently I keep them in pouches from airplanes. I have yet to figure out a more permanent system. I do have a very good system to keep track of who I asked for a card, who answered, and which I already received. I have a very detailed spreadsheet, organized by state and alphabetized within each states section.

Have you visited a lot of libraries? Do you have a favorite?

Do you collect other things or just library cards? 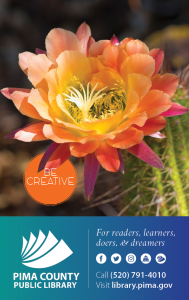 I love the atmosphere, being surrounded by books in a quiet place.

Which Pima County library card do you have?

I have a vertical one with a flower on it and it says “be creative.”

What are you reading now?

Collecting cards has been an amazing experience. I’ve been so glad to interact with some incredible librarians, and I’ve learned so much about so many different areas around the country!!