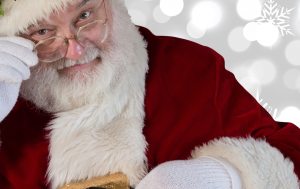 In 1932, during the Great Depression the merchants in Mesa, Arizona decided that they needed something special for the Christmas parade. John McPhee, editor of the Mesa Tribune, came up with what seemed to be a brilliant idea.

The idea was to hire a parachutist to dress as Santa Claus then jump from an airplane to make a triumphant landing. McPhee hired a parachutist but the plan hit a snag when the man got drunk the day of the parade and was not able to make the jump. McPhee's solution was to borrow a department store dummy, dress it in a Santa suit, and send it up in the plane. When the airplane had reached sufficient altitude, the dummy was pushed out while the parachute ripcord was pulled. Unfortunately, the parachute did not open, so the Santa Claus dummy plummeted to the earth. Believing they had just witnessed a tragic death, distraught children in the watching audience began screaming, "Santa's dead, Santa's dead."

In an attempt to salvage the stunt, and calm and reassure the children, McPhee put on a Santa suit to try and convince the children that Santa Claus was okay, but the damage was done. McPhee even left town for a few days hoping the episode would be forgotten. It was not forgotten. McPhee was always identified as "The Man who killed Santa Claus."