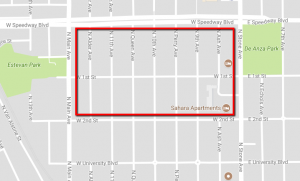 An area that is now part of the Dunbar Spring Neighborhood was formerly home to the Court Street Cemetery.

Located in an area bordered by Speedway on the north, Stone Avenue on the east, Second Street on the south and Main Avenue on the west, the cemetery was in use between 1875 and 1909. While many of those interred were moved to the Evergreen Cemetery on Oracle Road, a significant number of remains were not.

According to a 2013 article in the Arizona Daily Star, local archaeologist Homer Thiel estimated that "at least half of the burials were left in place and are present beneath the streets, sidewalks, buildings and backyards of the neighborhood." The website of the Dunbar Spring Neighborhood Association notes that a grave containing human remains and a Civil War-era soldier’s uniform was discovered by a neighborhood resident in the 1920s.

Signs in the Dunbar Spring Neighborhood commemorate this historical cemetery.