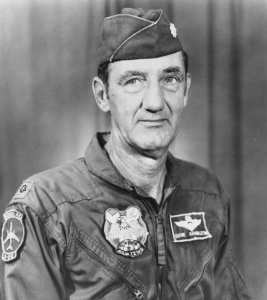 An EB—66 bomber was flying over Vietnam on April 2, 1972 when the aircraft was hit by a surface-to-air missile. Iceal E. "Gene" Hambleton parachuted from the aircraft and landed in an area occupied by about 30,000 North Vietnamese troops. The Air Force launched a rescue operation to bring Colonel Hambleton out of enemy territory. Hambleton’s rescuers had to figure out how to give him travel directions that the enemy would not be able to decode. The rescuers found out that Hambleton was an avid golfer with a photo-like memory of every golf hole he had ever played. So the radio transmissions to Hambleton were given in a code based on various golf courses that Hambleton had played.  For the first stretch, for example, he was told to mentally picture and walk along the first hole of what now is Omni Tucson National Golf course. In other radio messages he was told to walk holes from several other golf course layouts including the Davis-Monthan Air Force base golf course.

Hambleton was rescued but at least seven U.S. Service members died during his rescue.

The origin of the term "Bat-21":  Bat 21 was the call sign of the EB-66 radar jamming aircraft in which Hambleton flew as a navigator.