This article by Library Technical Assistants Reyes Suarez and Leland Murray was originally published in the Arizona Daily Star on October 25, 2015.

Reyes’s story
I started working at the library not long after graduating high school. I had participated in a youth nonprofit called Voices, Inc. where they taught us journalism and photography skills. They helped me produce an article for the Arizona Daily Star in a special publication. It was a big moment in my life where I finally realized I had a voice, and I could do something with it.

Unfortunately, Voices shut down a few years after I left. A lot of my efforts here at the library have been to fill the void that was left after Voices closed. I also worked at the DeAnza Drive-In as well, but only got free movies and nachos out of that.

I love the way the library has supported a lot of my individual passions.

I’m a huge movie nerd (I blame my time at the drive-in for that). I felt there was a great need for a youth media center in Tucson, and the library staff recruited me for a program to help design one. I had an inkling that I wanted to do filmmaking, and they provided equipment to produce a documentary about that project.

My supervisors at the library saw something in me that I didn’t even know was there. Now that I’m at Mission Library, I’m working more directly with the public, and I just want to give some of what they gave me back to our patrons. It’s not about just allowing them to develop, but supporting them as well.

A woman came in the library on a Friday to translate some court documents for her work. She only had until Monday to finish translating 15 full pages, and they were saved as an image instead of typeset. I kept trying to find a program to recognize the document and convert it, and I was actually able to pull it off. It was something I never did before, and this patron claimed I helped saved her job.

I also do some filmmaking with Pan Left Productions, a local nonprofit centered on empowerment through film. They took me on when they saw the documentary I helped produce for the library, and I’ve worked on some projects with Pan Left.

Leland’s story
The library is actually the first real job I've had. Before working here I was bouncing around from restaurant to restaurant just trying to stack paychecks and make it through to the next job. 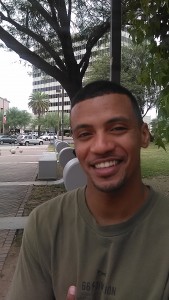 Once I was hired as a library page I started to realize that there was a chance for growth in the library system, and I knew that this career was a keeper.

My favorite part about working at the library is being able to help the community, assisting people with whatever issues they may have, and answering any questions they bring up to the front desk. It’s not always easy to come up with the solutions, but hearing them say, "Thank you" makes it all worth it.

Once an elderly gentleman came into the library with his Kindle, attempting to remove ebooks that he had checked out from our catalog. He was struggling to remember the steps he took to do this with the ebooks he had returned before.

After trying to figure this out at the desk for some time, he started becoming more and more frustrated. I grabbed a seat with him way so we had a better space to work. Finally, after a few more minutes of putting our heads together, he was able to remember the return process and get his books checked in ahead of time. He was all too grateful.

He wrote down the steps so he wouldn't forget them, thanked me, shook my hand, and left happy.

Reyes Suarez is a Library Technical Assistant at Mission Library. When he’s not working or trying to see almost every movie that is coming out, he serves on the Board of Directors for Pan Left Productions.

Leland Murray has been working at the Library for three years, and is a Library Technical Assistant at Mission Library. On his days off, he’s usually home watching Netflix, practicing his B-boy moves, or working on a movie script that will soon be a box office hit.

Celebrate I ♥ My Library Week at Pima County Public Library
When: Monday, Oct. 26-Friday, Oct. 30
What: Activities for all ages at different libraries during the week. Sign up for a new library card, and pick one of five new card designs. Wear blue and green library colors, and take a selfie. Share your 7-word library story on the library's Facebook page using the hashtag #LibraryLove.