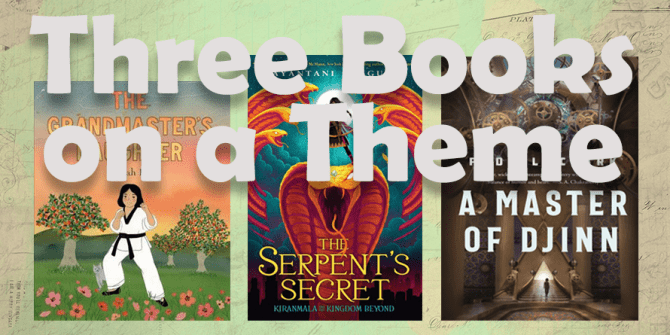 Do you like fantastic stories that include mythic creatures either in or from otherworldly locations? Do you crave stories that feature female characters in leading roles tackling problems head on? Here are three books at different reading levels that involve Asian monsters meeting their matches.

Sunny is the grandmaster’s daughter in this picture book aimed at readers ages 3-7. Sunny is a black belt in Tae Kwon Do, which is a martial art from Korea. Sunny spends her time taking care of the dojang and neighborhood, training, and teaching white belts how to kihap - breathe or shout powerfully from the belly through the mouth. She does her job so well that the loud kihaps wake monstrous creatures in the mountains that also want to train.

Kiran’s parents always told her that she was an Indian princess, but as a Jersey Girl growing up in Parsippany she never believed them. When her parents disappear on her twelfth birthday and a rakkhosh demon appears in her kitchen, Kiran is determined to try to find her parents even if they are in another dimension. With the help of a couple of princes, Kiran begins her journey to The Kingdom Beyond the Seven Oceans and Thirteen Rivers. This middle grade chapter book is the first in a series, written by an author of immigrant parents, and is based on many Bengali folktales (see Author’s Note).

This title is available in multiple formats.

A Master of Djinn

While the story is set in 1912 Egypt, Djinn (Jinn, or Jinni) are supernatural beings in found in Arab, Persian, Syrian, and Turkish folklore. Presumably, the djinn immigrated to Egypt the same way the humans did. Agent Fatma works for the Ministry of Alchemy, Enchantments and Supernatural Entities. She is one of the first on the scene when all of the members of a secret society are suddenly murdered. As Agent Fatma dives into the case, she reconnects with an old friend, Siti, who has special powers derived from the goddess Hathor. Agent Fatma also learns that she will be getting a partner (even though she would much prefer not to). This story is part fantasy, science fiction, mystery, suspense and historical fiction rounded out with three fascinating female characters. It’s an excellent read and had me craving more. I highly recommend the audio version - the narrator is excellent.

This title is available in multiple formats.