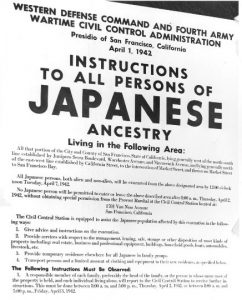 February 19 is designated as The Day of Remembrance to commemorate President Franklin D. Roosevelt’s signing of Executive Order 9066 on February 19, 1942. After the bombing of Pearl Harbor, EO 9066 created Military Areas 1 and 2. Military Area Number 1 designated the western halves of California, Oregon, and Washington, plus the southern half of Arizona and the area south of Los Angeles, California as Military Area Number 1.  Designated as a military exclusion zone, area number one “imposed the first military regulation upon alien enemies and all persons of Japanese ancestry.” The exclusion zone forbade the presence of all individuals of Japanese ancestry within the area and required their removal from the designated area.

Executive Order 9066 resulted in the removal of approximately 120,000 people of Japanese-American descent and their Issei (first generation) parents from the West Coast and into 10 War Relocation Authority Internment Camps: 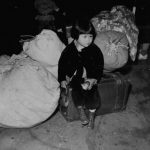 These individuals were forced to leave their jobs, their homes, and their lives to be imprisoned in camps located in remote isolated regions of the country.

None of these individuals were ever charged with espionage or sabotage. They were imprisoned in camps based on their racial background. The Day of Remembrance is a time for the Japanese American community to reflect upon the impact of mass incarceration on the Japanese-American community and to ensure this injustice never occurs again.

If you would like to learn more about the history of Japanese American internment, you can explore these following resources for virtual programs and more: