This article about MegaMania!! by Librarians Em Lane and Caitlin Burns was originally published in the Arizona Daily Star on Jul. 6, 2018.

Em: “I always say that my favorite things about being a librarian are that I don’t have to do anything evil and I give people stuff for free. MegaMania is an annual Pima County Public Library event that is the epitome of giving stuff to people for free. Comic-Cons are fun events where people get a chance to celebrate all the geeky stuff they love with tons of other people who share that love. But they can be really expensive, which limits how people and families can participate. To me, MegaMania is a glimpse into that world, but it costs nothing and is accessible to all.

“Every day at the library, we specialize in digging deeper. We want to connect you to the things you love to geek out about and then take it to the next level. Love watching your favorite YouTube channels? Attend one of our video editing classes and learn how to make the next viral video. Interested in computer programming, but it all seems like a lot to just jump right into? Join us at Code Club.

“MegaMania continues in the same spirit of learning, exploring and geeking out, but cranked up to 11. We have author and artist workshops, free books, on-site cosplay making (complete with library staff stationed at sewing machines to help make your fantasy outfit a reality), a board game library, virtual reality games, free pizza, and … so much we don’t have room to list it all.

“Getting a chance to geek out with your friends should not just be limited to folks who have a lot of money to spend; we want you to be able to have just as much fun without having to go broke. If you think about it, that is a tenet of geek culture, right? A group of people that love the underdog, fighting for our favorite show to stay on the air or for the unlikely hero to finally win. All of those things have nothing to do with buying and everything to do with creation and celebrating our excitement.

“MegaMania is here to give you the platform for that celebration of the creative. I’ve heard public libraries called pillars of democracy before, and if that’s true, then MegaMania is the democratization of geek culture.”

Caitlin: “I often think back to MegaMania’s very first year at the Murphy-Wilmot Library in 2011. (It was MangaMania back then.) Our team had meticulously planned for it to be a teen-only event but it was pretty clear from the second we opened the doors that it was an event for everyone. We’re happy to say that we’ve added lots of awesome programs for families: Check out Storytime with Hagrid , Portable Planetarium, the crafting area, or Rainbow Storytime if you’re bringing kids with you.

“MegaMania celebrates gaming, cosplay, literacy, art and everything in between. It’s also a supportive environment where people can learn new things. Kids, teens and adults who are entertaining the idea of writing or making art professionally can meet published, successful creators from all over Arizona. I coordinated the author and artist track for many years, and I loved watching conversations between authors on a panel while they took questions from the audience and shared stories about how they broke into the industry.

“One of my favorite things to do at MegaMania is check out the artist demonstrations. I’ve seen kids as young as 4 and 5 (who happened to be wearing Ninja Turtle costumes) sitting in classrooms with their families, watching and learning from Adam Yeater as he patiently taught them the art of pen and ink. Bestselling author/illustrator Adam Rex is known to doodle little characters as he signs free copies of Frankenstein Makes a Sandwich or Chu’s Day. I’ve seen Jeff Mariotte and Marcy Rockwell stay late to answer questions from up-and-comers who just need a little advice on how to find their first publisher.

“Our event has evolved a lot over the last eight years. From our humble beginnings at Murphy-Wilmot Library to a bustling event on a college campus, we’ve only gotten more passionate about what we do and how we do it.” 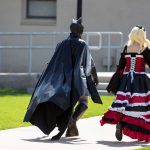 MegaMania!! 2017 participantsWho will you dress up as? 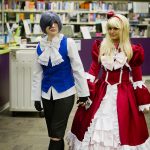 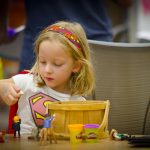 Young girl at MegaMania!!Even little cosplayers get into the act. 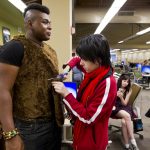 make a costume!Need a costume? Make one! 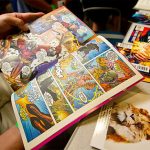 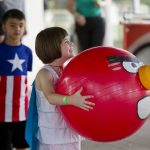 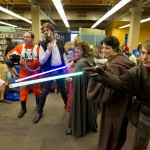 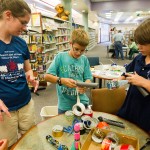 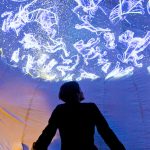 Portable Planetarium at MegaMania!!Get a view of the stars 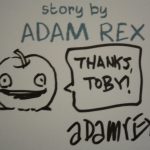 MegaMania 2016 Thanks, Toby from Adam RexMeet your heroes 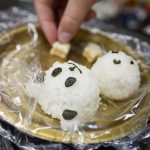 improve your foodWhy would you eat boring rice? 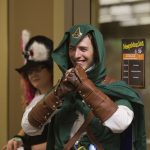 Em Lane and Caitlin Burns are librarians on the MegaMania planning committee. Both work at the Joel D. Valdez Main Library. They have worked on the event since its inception in 2011, growing the event from a teens-only event held at a local library to a family- friendly, all-ages event too big for one library’s walls. The event is now held on the Pima Community College Downtown Campus. This year’s event takes place from 1-5 p.m. Saturday, July 14.