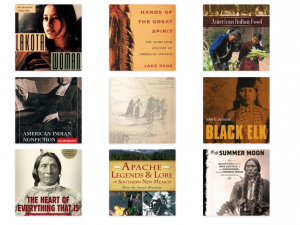 "We must remember we are part of a larger story," wrote LaDonna Brave Bull Allard in a recent article in Yes Magazine. "We are still here. We are still fighting for our lives." Her great-great grandmother survived the Inyan Ska Whitestone Massacre of 1863, during which U.S. Army attacked an intertribal buffalo hunt, during which an estimated 300 to 400 were killed. "153 years after my great-great-grandmother Mary watched as our people were senselessly murdered. We should not have to fight so hard to survive on our own lands."

In honor of Native American Heritage Month, PCPL is highlighting and expanding its collection of books on Native American History, including contemporary books by indigenous authors including An Indigenous Peoples' History of the United States, and a new picture book by Sherman Alexie, Thunder Boy Jr. Continue to visit our website and catalog throughout the month for more titles!

You may already have heard of the MacArthur Fellow, Linguist, and Cultural Preservationist Ofelia Zepeda. In addition to her seminal text A Papago Grammar, also published as A Tohono O'Odham Grammar, Zepeda is the author of two books of poetry (Where Clouds Are Formed; Ocean Power) published by the University of Arizona Press, whose mission is to enrich understanding and inspire curiosity, and which displays its ongoing commitment to Indigenous and Native American studies through its award-winning literary series, Sun Tracks, opens a new window.

Some other especially notable local Native authors, many of whom have been professors at the University of Arizona and Arizona State University, include: Simon J. Ortiz, a “leading figure in the Native American literary renaissance,” according to the Poetry Foundation; Diné author and poet Laura Tohe; and distinguished author of both academic work and popular fiction Tom Holm.