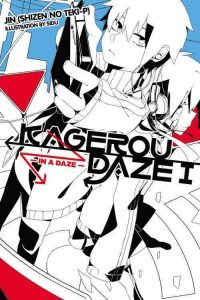 Kagerou Daze  is the first novel adaptation of the Kagerou Project, written and created by Jin, a Japanese sound producer, composer, and writer.  Okay, this might get a little confusing, so bear with me.  The Kagerou Project is essentially a multimedia story, a story that changes depending on which media form you so happen to gander upon.  Based on my admittedly limited understanding, it all garnered attention in 2011 when Jin submitted a song titled ‘Kagerou Days’ to a Japanese video sharing website.  The song tells the story of a Hibiya, a boy stuck in a time loop and forced to repeatedly witness his friend’s death.  Because of the popularity of the song, Jin expanded the encapsulated universe, and the Kagerou Project was born.  The Kagerou Project itself consists of movies, anime, manga, novels, and songs, all of which follow the Mekakushi Dan, a group of teenagers with strange eye-related powers.  (For example, Hibiya can use his eyes to see distant objects from an aerial view).

On to the actual novel, upon which this review is based.  Kagerou Daze: In a Daze- follows Shintarō Kisaragi, an eighteen year old boy who views the internet as his lifeline, and hasn’t left his house in two years.  One day he is forced to venture into the foreboding outside world for the innocent purpose of attaining new computer parts.  Of course, he manages to get himself stuck in a hostage situation, then proceeds to save himself and his fellow hostages. Then gets himself involved in a highly sketchy gang.  So all in all, a normal day.

I’ve only read the first novel and listened to the song ‘Kagerou Days,’ but I find myself already captivated and curious about the universe and unique fan community created by Jin.  The novel itself is ridiculous, a giver of extreme second hand embarrassment for main character Shintarō Kisaragi, and is a very different reading experience than what I’m used to.  On the other hand, the book is strangely endearing and provides unexpected insight into the human condition, friendship, and the effects of our modern, technology filled world.  Shintarō is someone that I can easily (perhaps unfortunately) relate to.  He’s awkward, unsure of his place in the world, yet is able to draw on inner strength and somehow save the day, a hopeful fact reminiscent of Japanese shoujo culture.  The novel features song lyrics from ‘Kagerou Days,’ which added a nostalgic and beautiful edge to the prose.

I originally read the book on recommendation of a page at a Pima County library branch, and am highly thankful to them for doing so.  I’d recommend this book to anyone looking for a lighthearted and oddly sweet book about a kid trying to find meaning in his life whilst attempting to follow his dreams.  (Do it!  Do it!  Read ze book!).

-Keiko, (Dusen)Berry Blogger and member of the River Teen Advisory Board