This article was originally published in the Arizona Daily Star as a Local Opinion by Maureen Kearney on September 28. 2019.

The following column is the opinion and analysis of the writer. 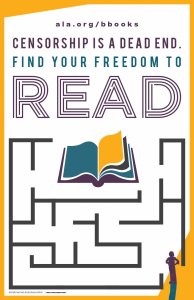 A young girl yearns to play Charlotte in her school’s production of “Charlotte’s Web.” A couple of mischievous kids assist a rather silly superhero. A teenage girl who witnessed a terrible crime finds the courage to speak out. A community has a parade on a summer day. What do all these books have in common?

They’re all on the American Library Association’s Top Ten Banned or Challenged Books of 2018.

The ALA isn’t the one banning these books. Instead, this list calls attention to how often schools, libraries and universities are asked to remove these books from their collection, denying access to the whole community, and especially those who might need those books the most.

Rudine Sims Bishop, an eminent black professor of children’s literature, wrote of books as mirrors, windows and sliding doors. Like a mirror, a book can reflect and validate a person’s experience of their culture, sexuality or even just their personality. Do you remember a book that seemed to be exactly about you? Do you remember the joy of feeling seen and known?

Likewise, a book can give a reader a long look through a window into another’s experience, or even invite them to step through the sliding glass door of imagination into a brand new world. By reading a book about a person that’s different from them, they affirm our common humanity even through our differences, and prepare readers to encounter these differences with an open heart when they meet them in the world outside the pages.

Books bring light into our world. But if a book is taken off the shelf, hidden away, or simply denied to a certain segment of the population, that leaves all of us in the dark, especially the child or teen who may need that affirmation and validation the most.

Books for children and teens are the most often targeted by would-be challengers and censors, and often the adult books you see on those lists are targeted by censors because a school has assigned it as required reading for a class.

Books with LGBTQIA+ characters and themes are especially vulnerable, but books have been challenged and banned for all sorts of reasons, including violence, religious and political viewpoints, profanity, sexual situations, and the amorphous catch-all “unsuited to age.” And though it’s unspoken, a great number of books about people of color are among the most challenged.

Let’s be clear: your favorite librarians and booksellers are all for you knowing and caring about what your own kids read. That’s just good parenting. But we draw the line at people and organizations who want to deny access to the whole community. From the ALA’s Freedom to Read statement:

“It is the responsibility of publishers and librarians, as guardians of the people’s freedom to read, to contest encroachments upon that freedom by individuals or groups seeking to impose their own standards or tastes upon the community at large; and by the government whenever it seeks to reduce or deny public access to public information.”

All this is why booksellers and libraries celebrate Banned Book Week in the last week of September. Not because we’re in favor of banning books. Just the opposite! We celebrate Banned Books Week to call out those who would cover those mirrors, shutter those windows, and lock those doors for everyone.

Oh, and in case you’re curious, those books I mentioned in the first paragraph are “George” by Alex Gino, the “Captain Underpants” series by Dav Pilkey, “The Hate U Give” by Angie Thomas, and “This Day in June” by Gayle E. Pitman — all of them proudly available at your local library.

Maureen Kearney is the Managing Librarian at the Southwest Library. She has worked for Pima County Public Library since 2008.