I think I found a tracklist longer than one of my blogs! 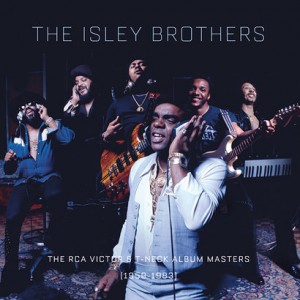 This week Freegal announces the addition of a MAMMOTH collection of classic Isley Brothers material: The Complete RCA Victor and T-Neck Album Masters, 1959-1983opens a new window. Described by AllMusic.com (without even a wink of an eye) as a "compact 23-disc collection," this set has all you need in one place. It also features a bunch of rare and alternate versions of songs not easily found before. We get five downloads a week, so, as the Brothers sing on one track: "I've got work to do!"

While considering the RCA/Victor/T-Neck collection, here's an earlier bit of written funk I posted about Freegal's vast Isley Brothers collection.  Note: Freegal seems to have dropped the Funky Family collection I go on about below, since its absence is more than compensated for by the Complete Album Masters set.

It was the summer of '79, and Tucson’s disco radio station, 13-KHYT, just couldn’t play the Isley Brothers often enough. It seemed every time I tuned in, there was the churning funk of “I Wanna Be With You,” with its vocoder hook repeating the title over and over, alternating with a semi-whisper of the Isleys chanting “You and me, babe, gettin’ it on, you and me.” Even though I loved disco, I grew to hate the tune, and generally avoided the Isley Brothers’ music whenever I could. A few years later, KUAT-AM began to run a brief funk/soul program on Saturday afternoons, and the careful selections of the two primary DJs on that show led me to a reconsideration of the Isleys. One song which they favored in particular, “Coolin’ Me Out” (a bittersweet slice of soul music), caught my ear, but I never got around to picking up a copy of the LP (in part ‘cause I couldn’t quite believe I was gettin' it on to the Isleys).

Still later I began volunteering at KXCI and while rummaging through its vast collection of vinyl, I stumbled across “Coolin’ Me Out” and promptly ran it into the ground, playing the song during every shift of mine on the morning music mix. Then I was off to grad school to study history and, having steeped myself in the past, I began a sort of personal musicology by seeking out all the quality funk grooves of the past I’d neglected. One day I was back home in Tucson and, on a nostalgic visit to Zia Records, of all things I bought a CD by the Isleys, Funky Family (it was recommended in the All Music Guide ... a book at the time).

The disc was a life-changer. It seemed as if I’d never heard the band before. Ernie Isley’s wild guitar playing burned like few rockers I heard before (Ernie played with Jimi Hendrix back when the latter worked as a backing musician for the Isleys). I remember listening to “Who Loves You Better,” marveling at how Ernie’s leads soared over the ferocious funk grooves the other members of the band poured out through my speakers. And the lyrics! A song like “The Pride” fairly well blew the roof off my mind, becoming a personal anthem that helped pull me through the long and agonizing experience of writing a dissertation and then defending it before less than supportive professors. The song that started it all, “I Wanna Be With You” still annoys me somewhat, but I’ve come to appreciate the groove.

I’ve since gone on to collect most all of the Isley’s 1970s releases, and it pleases me immensely that Freegal offers a huge collection of their music. One of the things I really appreciate about the new Complete Album Masters compilation is that it includes full-length versions of each track rather than the severely edited radio versions that populate most ‘best of’ collections. These longer takes allow one to hear Ernie’s solos in all their glory, dive deep down into the funk groove, or drift along with the sweet soulful sound. Highlights? Well, it’s not easy for me to settle on just, say, three essential tunes from the record, but “Who Loves You Better,” “The Pride” and “Coolin’ Me Out” would provide you with excellent examples of the group’s rock, funk and soul sounds.

If you’re feeling adventurous (and have the diligence/time), Harvest For The Worldopens a new window features a nice 8+ minute live cover of the old Seals & Croft number “Summer Breeze” (their studio recording of the song is on 3 + 3opens a new window). Givin’ It Backopens a new window, from 1971, offers an entire album of covers by the Isleys, as they take on songs written by Hendrix, Neil Young and Bob Dylan (among others). Released in 1975, The Heat Is Onopens a new window contains one of their most powerful ballads, “For The Love Of You,” and 1977’s Go For Your Gunsopens a new window is perhaps their very best, with consistently excellent songs that range from funk (“The Pride”) and black rock (“Tell Me When You Need It Again”) to a pair of their best love songs, “Voyage To Atlantis” and “Footsteps In The Dark” (which, however, is not a happy love song).

All of these are available for download, and clicking on any of the album titles mentioned above should link you to that record on Freegal.