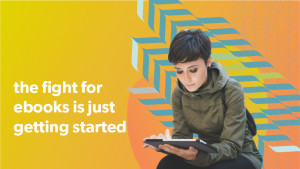 Note before you start reading! If you're already well-versed in this topic and just want publisher contact information, scroll to the bottom.

Ever wondered why the Library doesn't have unlimited copies of digital books?

It should be easy, right? Buy 100 digital copies of a book and let everyone borrow them. Not quite... libraries lend digital copies just like printed books - on a one-to-one basis. And the prices we pay for those digital copies through our vendors are mind-bogglingly high.

Take, for example, Celeste Ng's New York Times bestseller, Little Fires Everywhere. You could go on Amazon and get the ebook for $12.99. Want to know how much the Library pays for ONE copy? $65!

It's about to get even more expensive...

And now, the big publishers are putting in place new policies that will make it even harder for libraries to keep up with demand.

One of these changes will make it so that libraries can only "rent" titles for a certain number of check outs or a certain time period, causing libraries to purchase them over and over.

Waitlists are about to get longer...

And then there's the embargo. When a highly-anticipated book is released, we'll only get to purchase one copy for up to two months after the book is released. There's no way to keep up with demand.

Do you think this is unfair?

Whether you prefer snail mail, email, or social media (use #eContentForLibraries), you can make your voice heard by contacting the publishers directly. You can also sign this petition from the American Library Association. Together, we can make sure that we—and libraries all over the world—can continue serving our communities and providing equitable access to digital books.