Maybe you’ve thought that you’d like to visit Tohono Chul, the Tucson Botanical Gardens, or the Museum of Contemporary Art Tucson (MOCA Tucson), but you’re not sure what it’s all about or if it will be worth the price of admission.  The Pima County Public Library is here to save the day with our Culture Pass program, which provides two general admissions to a number of Tucson and Phoenix locations of interest. We provide this service as part of our mission to transform lives by educating, inspiring and connecting people.  And we hope that some of you will be inspired by your visit to become active members of these unique public institutions. 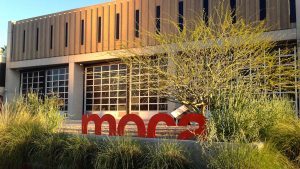 MOCA Tucson is located at 265 S. Church Avenue, near the intersection of Church and Cushing downtown, in a repurposed old firehouse and is open Wednesday through Sunday from noon to 5 pm.  But MOCA is more than what you find at their main gallery space. From MOCA Minor Mutiny, a free, after-school program on Thursdays for kids 13+; Free Third Thursdays, a monthly, free, themed evening; to off-site events like their recent Cyclic in the giant lung of the Biosphere 2, our Culture Pass helps you scratch just the surface of what MOCA brings to Tucson.

One of the goals of MOCA Tucson is helping contemporary artists have the time, space and funds to make their ideas a reality. Marica Whittemore, the Public Programs and Community Engagement Manager for MOCA Tucson told me, “our Artist-in-Residence program has an open call for applications that is published every summer. From there, we receive hundreds of applications and narrow it down to eight selected applicants... While in residence, the artists are given an apartment on site at MOCA, a studio, and a production stipend to work on art.”

This winter and next spring, several of these artists will participate in ArtNow! lectures, including one on Tuesday, December 18th, from 6pm to 7pm at the main gallery with artists Tra Bouscaren and Gal Amiram.  Admission is $10, or free for MOCA members.  Whittemore says, “The ArtNow! lecture will feature discussions by the two artists on their work and experiences as Artists-in-Residence here at MOCA. It will be led by our Executive Director and Chief Curator, Ginger Shulick Porcella.” Culture Passes are not accepted for special events, but if you can't make it to the lecture, maybe you'll be able to use a Culture Pass in the future to see what these amazing artists have created.

I had the pleasure of conversing with Gal and Tra via email, so if you’d like to know a little more about each artist, keep reading!

Gal Amiram will arrive in Tucson just before her ArtNow! talk and I asked her a little about her plans and her art:

I intend to use my time at MOCA Tucson to continue and develop my project “No Go Zone”,  which started following a wave of ongoing Palestinian protests at the Israel-Gaza border. The protests erupted following the relocation of the American embassy to Jerusalem and the humanitarian crises in Gaza. As a reaction, I started collecting photojournalistic images, taking only photographs captured from the Israeli side, which I have layered as a large-scale, time-lapse, photo panorama. Using a digital assembly I uncovered latent images, missing information and hidden details. I then reinserted this information into the images produced by the subjugating gaze. The Panorama remains unfinished, as the protest continue and the collection of images expand. At the residency I wish to continue the Panorama as well as add a personal, essayistic component – such as a video or book – to augment the work.

My interest with perspective started as a technical interest early on, and later expanded to be conceptual as well. I was always interested in the emergence of linear perspective in art history; specifically in paintings from early renaissance where the perspective is skewed and surfaces are oddly flat. I found the desire in art to trick the eye intriguing. As I started using a camera, I tried to challenge this trait that is inherent to photography. Later I began noticing the way certain perspectives or point of views are imposed on me as a viewer, both in art and as a consumer of news and media. Subsequently I made work that challenges and rejects directed and imposed points of view from both a technical and a conceptual standpoint, which feed into each other.

Film was always a big influence - Italian neorealist films opened my eyes to art that is concerned with aesthetics and social problems. Hito Steyerl’s videos and writings were influential - especially her text “Documentary Uncertainty.” Moving to Los Angeles; my time in grad school at ArtCenter, and getting to know LA’s expansive art scene with a community of inspiring peers. Also the exhibition The Uses Of Photography: Art, Politics, And The Reinvention Of A Medium at the Museum of Contemporary Art in San Diego (2016) was inspirational - it introduced me to conceptual photography that happened here in California in the ‘70s and ‘80s that centered around artist as social critics that also employ text.

I don’t see a contradiction between artists and social commentators, I see myself as both. For me, good art ought to have a critical element to it, whether it’s in relation to its own medium or to broader social-political subjects.

Making commodities is definitely not on my mind while creating work. My art is often impermanent or passing, I exhibit photos on the floor for people to walk on and I nail photos to the wall without proper framing, damaging the print. Even though I think rejection of commodification is important, as an artist in the art world I’m aware that I can only do so to a certain extent. For me it is more important to make art about subjects I find to be meaningful rather than make art that is primarily concerned with the market.

One of the books I enjoyed to most recently was Leaving the Atocha Station by Ben Lerner. It tells the story of an American poet who goes to Madrid for a residency. I found the way Lerner described the experience of making art, consuming art, and at the same time coping with being a human being (successfully or not) depressingly true. I also feel related to the way language is explored and reflected in this novel – writing and communicating in a foreign language is something I struggle with as an immigrant on a daily basis.

While I was doing a project about the New York Times 360 VR videos I came across a video of goat yoga. I was amazed to learn about the phenomena of taking yoga classes with goats. The goats jump on the yogis while they are holding a pose. I’m still sort of speechless about it and find it totally surreal. I decided to stage a photo of goat yoga as part of an exhibition I was working on at the time. I photographed my wonderful Yoga teacher Lauren, and two goats named Mavis and Augie which I found through their own personal Facebook page.


Tra Bouscaren has been in Tucson since October and will be wrapping up his residency by the end of the year.  I asked him what he’s been working on in Tucson and for his doctoral dissertation, as well as some other questions about his art:

I've been scavenging for found materials to build with (as I always do), and trying to make connections around town. In addition to my role at MOCA Tucson, I've become Visiting Critic and Lecturer for the MFA program at the University of Arizona, Head Media Operator for Polaris Broadcasting, and Lead Interactive Video Designer at Creative Machines. Creative Machines has also given me a stand-alone building in which to build a new installation. I'm hoping to open that exhibition in mid-January. After that in late March or early April it looks like I'll also be doing a project with Flam Chen.

My dissertation is titled “Affect Horizon”. In it I argue that a proper understanding of installation art serves to undermine installation's framing as an art medium, while simultaneously opening a conception of a correlationist installation aesthetics through which we may ground a new approach to media ontology [study of being].

My main concerns are focused on intersections of American spectacle, the surveillance state, waste culture, and climate change. As far as being influenced by other artists, there are too many to list. Lately I've been thinking about artists like Krzysztof Wodiczko, Isa Genzken, Joseph Beuys, Dara Birnbaum, Pierre Huyghe, Tony Oursler, Paul Thek…

I build site-responsive installations using locally-sourced found objects. The work is built to meet the space, so once it's built in, it can't really be moved. It can only be broken down and re-built into something else, somewhere else. The work is provisional, like me. When I die, my work will also die, which is fine. There's nothing permanent about what I'm doing.

As far as the commercial question goes, I don't work much with commercial art galleries anymore, and I'm happy about that. Making objects that feign permanence is the opposite of what my work is about. For the past 8-10 years I've shifted to doing more and more projects with non-profit institutions (universities, museums, foundations and so on) whose programming is at least theoretically not mandated by market pressures. Such institutions offer stipends and/or residencies to build installations.

I hope these interviews make you excited about the future of contemporary art installations, as well as visiting our local MOCA Tucson.  We hope you'll use our Culture Passes to dip your toes into something new and exciting, and that it may lead you to expand your horizons with the ArtNow! series.