Did you know that the Joel D Valdez Main Library has a Spanish Language Club which meets every 2nd Tuesday of the month at 10:00? Come on down and practice some Spanish with a lively and diverse group. The teacher, Ana Blum, does a wonderful job creating a supportive and helpful environment for learners at all levels. We asked Ana a few questions so that our patrons could get to know her a bit better. 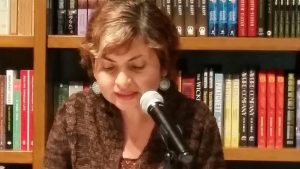 Where did you get your education? How long have you been teaching Spanish?

I studied Political and Social Sciences in my native country (Ecuador) and here in the States I studied Spanish at the University of Colorado. Now I'm about to finish my Masters in Creative Writing at the University of Salamanca, Spain. I’ve been teaching Spanish for a long time. I first taught in my early twenties at literacy programs. Then I was an assistant professor of Language and Communication and later, when I moved to United States, I became a Spanish Teacher for continuing education classes.

What kinds of things do you do at Spanish Club?

We read, we write, we sing, we create. Every meeting we cover a variety of activities, ranging from discussion of newspapers clippings to short stories, poems and songs. Students also have the opportunity to create their own fiction and poetry. We put the emphasis on pronunciation without pressure or perfectness and we learn a bit of grammar also. But most of all we have fun.

What is your teaching philosophy? How do students best learn another language?

I believe in the creation of joy through learning. Spanish doesn’t have to be just another language to practice or explore. It could also be a reason to have fun, to smile, to brighten your day. So in my many years of experience I’ve discovered that playing, singing, laughing, and a good dose of inspiration are the best ways to learn another language.

What level of Spanish ability do I have to have to participate?

The ideal would be intermediate to advanced, but so far we’ve had all levels and somehow it has worked. Everybody has participated and learned something new. So, in other words, I will say to anybody that would like to try our Club: Come and we’ll figure it out.

Is Spanish your native language? Did you grow up speaking English? Tell us about how you learned English.

Yes! Spanish is my native language. And it’s even more than that; it is my life language. I exist in Spanish, I dream in Spanish, I flow in Spanish, and even after living in the States for almost two decades I carry and embrace my mother tongue with me all the time. I create with it. I think this happens because besides being a teacher I am poet so I have a special relationship with my native words.

I did not grow up speaking English but I did grow up learning it. The study of English is a must at schools and high schools in most parts of the world. Even so there was not a primary focus on conversational skills, but on reading and writing.

We hope to see you on the second Tuesdays of the month at the Joel D Valdez Main Library!