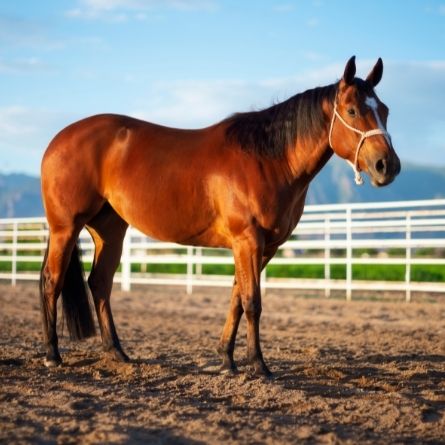 Oh, to feel the wind blowing through your hair at 55 mph – as you ride an American Quarter Horse!

Tucson joined the American love affair with Quarter Horses in 1943 when Rillito Park – then called Rillito Race Track -- opened. Quarter Horses, loved for their calm and friendly nature, were developed in America.

The track is on the National Register of Historic Places and serves as the home for the beginnings of American Quarter Horse racing in the United States. Racing now takes place in the months of January and February.

Quarter Horses were named because they are the fastest horses to run a quarter-mile. They accelerate fast and can also keep good ground speed for a long stretch. They can run as fast as 55 mph!

Historians consider Rillito Race track as the birthplace of the photo finish, along with other essential track rules. Tucsonans Rukin Jelks and Melvin H. Haskell developed the track, first racing horses on what was then Jelks’ farm.

Famous horses such as Shue Fly, Piggin String and Hard Twist had success at Rillito.

The track had some rough years, but made a comeback in 2011 when it formed a cooperation agreement with Pima County.

The Rillito Park Foundation manages the racetrack and the Jelks Stud Farm house. It has gained a wider community reach by hosting soccer games and tournaments on its many fields and for the popular farmer’s market.

Located along the bike trail known as The Loop, the weekly Sunday market hosts farmers, ranchers and artisan food purveyors featuring local produce and fresh cuisine. Heirloom Farmers Markets worked in collaboration with Pima County and the Rillito Park Foundation to build a state-of-the-art, permanent farmers market space. Four pavilions provide shade for a 5,000-square-foot shopping area, and along with the center entertainment circle, host a variety of small businesses.

Rillito Park also now is home to local youth and adult soccer, lacrosse, and football clubs. The Rillito Park Foundation is committed to expanding the number of fields at Rillito, and maintaining all fields in top-notch condition.

Find out more about what's happening at the Library this summer.