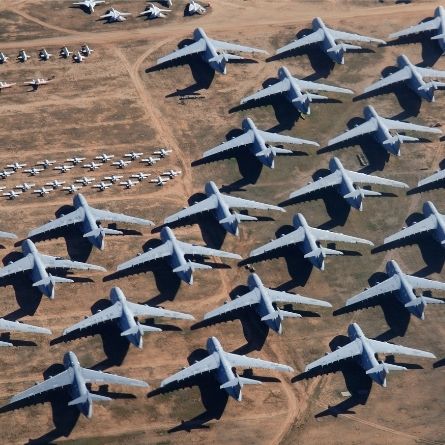 This summer, we invite you to discover and visit the various locations on our tracker to learn more about culturally and historically significant places and landmarks in our region.

The 309th Aerospace Maintenance and Regeneration Group (309th AMARG), more commonly known as the Boneyard, is the largest aircraft storage and preservation facility in the world. The Boneyard is located in Tucson, Arizona on the Davis-Monthan Air Force Base.

What is an aircraft boneyard? An aircraft boneyard is an area to store retired aircrafts from service. The Davis-Monthan Air Force Base Boneyard takes care of almost 4,000 aircraft. The original purpose of the Boneyard was to store excess aircraft from the Department of Defense and the Coast Guard. Today, it stores aircraft taken out of service from all branches of the U.S. Government. They also store U.S. made aircraft from other countries.

You may be wondering why there is such a large storage facility located in Tucson. Well, Tucson’s humidity levels are low so it is ideal in the prevention of metal corrosion. The ground is also hard enough to keep aircraft from sinking into the ground.

The Boneyard receives about 300 aircraft, and returns 50 to 100 aircraft back into service each year. (1) The boneyard also converts old fighter jets into aerial target drones. It is also an auxiliary facility of the National Museum of the United States Air Force.

There are 4 types of aircraft stored in the Davis-Monthan AFB Boneyard:

In Tucson you are fortunate, because you can take a bit of a tour of the Boneyard through the Pima Air and Space Museum. Other aircraft boneyards in the U.S. are restricted and off-limits. Unfortunately, due to Covid restrictions, in person tours of the Boneyard are suspended indefinitely. However, there is another option. You can check out 360 degree aerial images of the Boneyard here. Scroll down to the 360˚ image on the page. Enjoy!

Find out more about what's happening at the Library this summer.