Our very own Bill R. hits a milestone anniversary this week. He's celebrating 40 years (40 years!) with Pima County Public Library. On October 10, 1979 Bill began working for the Library - it was his first job. Over the years, he's held numerous positions at many libraries, including Murphy-Wilmot, Eckstrom-Columbus, Valencia, Joyner-Green Valley, and Nanini. It's likely you've seen him around!

To mark the occasion, we checked in with Bill about some of his favorite Storytime memories over the years.

I remember reading the book What Color Is Your Underwear by Sam Lloyd. The animals in the story were wearing different colored underwear. At the end of the story, a preschooler loudly informed the room that his daddy didn't wear underwear... "My daddy goes commambo!"

Once, at Thanksgiving Storytime, I wore an inflatable turkey costume while telling stories. One child exclaimed, "You are the biggest turkey I've ever seen."

Sophie, a preschooler, used to tell me that she was going to marry me and she would become Mrs. Bill.

There was the time I read Peanut Butter Rhino by Vincent Andriani and acted out the story. At the end, I sat on a paper peanut butter sandwich. I walked around with it taped to my behind. The kids went crazy shouting, "the sandwich is on your butt, Mr. Bill!"

I - and the kids - always loved Halloween Storytimes. I would often dress up as the Cat in the Hat and lead a parade of costumed children throughout the Library. 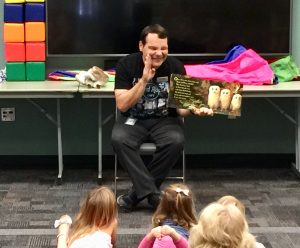 Bill has worked at Kirk-Bear Canyon Library for 21 years. One of the things that makes him happiest? Seeing adults who used to attend his Storytimes bring their own kids. Recently, Bill went to a fast food restaurant and was told that the cook had comped his lunch. He used to attend Bill's Storytimes and is now in his early 20s. The young man told Bill that he still remembered him and how much he meant to him as a child. ♥

From all of us at the Library and all the people whose lives you've touched... thank you, Bill! And congratulations!

Did you know that the Library offers nearly 250 Storytimes every month? From Stay and Play to Baby, Toddler, Preschool, and Family Storytimes, we've got something for everyone! Find the one that's right for you!