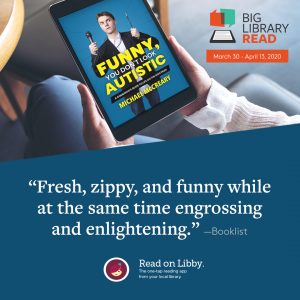 Join thousands of readers around the world who are taking part in the Big Library Read starting March 23.

Borrow the eBook or audiobook and read it in the Libby app on your phone or tablet. No waitlists! No holds!

Like many others on the autism spectrum, 20-something stand-up comic Michael McCreary has been told by more than a few well-meaning folks that he doesn't "look" autistic. This unique and hilarious #OwnVoices memoir breaks down what it's like to live with autism for readers on and off the spectrum.

Discuss online or use the #biglibraryread on social media to see what others are saying.

You could win a Samsung Galaxy tablet!

Use #biglibraryread on social media to join in the conversation and for a chance to win a Samsung Galaxy Tablet.

The Big Library read ends April 13, so get the Libby app now and get reading!