It’s been three years since Henri saw his wife and four children. That was in 2014 when he left his native Burundi to pursue a Master’s Degree in Humanitarian Action in Geneva, Switzerland.

In late-April 2015, political unrest befell the East African country which resulted in an attempted coup d’état. Hundreds of civilians were killed and thousands of peaceful political demonstrators were tortured.

A deeply committed human rights activist, Henri authored articles voicing dissent and decrying the violence. Having completed his studies, Henri was visiting family in St. David, Arizona. It was there he learned his writings had drawn the government’s attention and his family had been threatened. They joined hundreds of thousands of Burundians to seek asylum in neighboring countries. They settled in Uganda, where they are still living as refugees.

Having decided to stay in the United States and apply for asylum, Henri moved to Tucson to ﬁnd work. It’s where he met Mary, Citizenship Librarian at Eckstrom-Columbus Library. Henri says, “She was the ﬁrst person I met here that made me feel part of the community.” 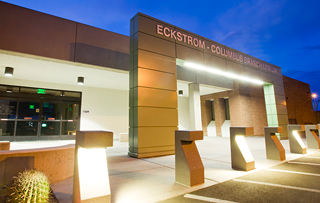 Though Henri received initial employment assistance from Refugee Focus, Mary provided information and guidance that helped him maneuver an incredibly daunting system. “Building a new life can be a disempowering process,” says Mary. 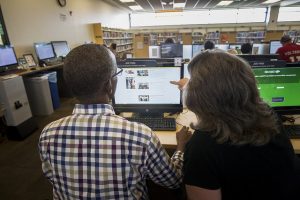 With a Bachelor’s Degree in English Language and Literature and two Master’s Degrees in Human Rights and Humanitarian Action, Henri’s experience is notable. But though he taught English in Burundi for 11 years and spent another 12 as an international professional getting settled and earning an income meant taking on jobs that left little room for exploring his options.

“I was working between 10–12 hours a day at a retail distribution center. I was tired. I was discouraged by the lack of alternatives.”

That is, until he met Mary.

“She gave me the most important thing I needed. She helped me set up an education evaluation through the Department of Education. By December 2016, I had earned my substitute teaching certificate.”

Mary says, “Many refugees don’t realize that the degrees they carry with them from their countries are often transferable. In Henri’s case, it just took one step to get him started.”

She helped make introductions that led to additional fulﬁlling work. At La Frontera, he facilitates classes with refugees and helps them avoid drugs and navigate complex educational systems. He is currently employed as an Employment Specialist at Catholic Community Services. 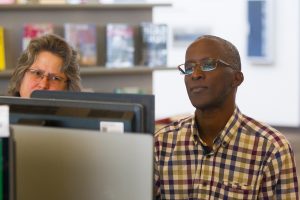 “Mary gave me information,” Henri says, “but she did so much more than that. She connected me to others. I wanted to integrate socially in a dignified manner and put my skills and expertise to work. Mary helped make that possible.”

Henri’s long-term goals are to ﬁnd employment in education or refugee work and reunite with his family. He’s been accepted into the University of Arizona’s College of Education Graduate Program, however cost remains an obstacle.

“I’ve not yet reached my goal, but I’ve made progress. Mary helped me feel part of the community. I’ve been really active since then.”

He’s applied to have his family come as derivative asylees (asylum seekers with relatives in the United States). He’s working with refugees and expanding his life in Pima County. With support from the Library, he discovered a path to follow.

Mary is thrilled to watch him make progress. “It’s an honor to meet someone like Henri. I know he’s going to be a source of good in our community.”