I’m not sure why, but November 1 is the anniversary of a lot of thingsopens a new window. Here is a smattering of them from history: 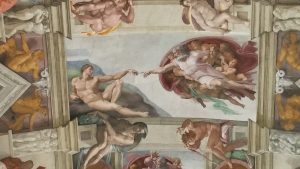 1512: Michelangelo’s Ceiling in the Sistine Chapelopens a new window is first viewed by the public

The chapel that was built for Pope Sixtus IV would probably just be any random medium-sized room within the expanses of The Vatican, if not for the brilliant man who made it famous. Michelangelo Buonarottiopens a new window, poet, painter, sculptor, all around creative brain, spent several years adhering to the detail that would become The Last Judgment, which lines the ceiling and was later expanded to the wall behind the altar. And art would never be the same.

1520: The Strait of Magellan is first “discovered” and navigated

Ferdinand Magellanopens a new window led his intrepid team down the coast of South America and used this strait to access the Pacific Ocean. Until the Panama Canal, it was the most commonly used sea route for transcoastal travel in the Americas.

1611: William Shakespeare’s The Tempest premieres at Whitehall Palace in London

The King’s Men performed The Tempest, one of Shakespeare’s weirder comedies, for King James I and his court on this date. We quote this play often even in 2016, sometimes without even realizing it: did you know the common phrase "a sea change" comes from it?

In order to pay for military engagements on the North American continent (and to keep some money on British soil, more than likely), the British Parliament posed a new tariffopens a new window upon the citizens living in the colonies, contributing to the unrest and building disenfranchisement with the “rulers” of British citizens living on American soil.

The first medical school for women in the United States, the Boston Female Medical College, eventually merged with Boston University. Read more about women doctors in the nineteenth centuryopens a new window.

While not the first national meteorological service in the world (that honor goes to the United Kingdom Meteorological Office), the Weather Bureau, now called the National Weather Serviceopens a new window, was one of the earliest to utilize modern meteorological technology for national dissemination of weather forecasting.

1897: The Thomas Jefferson Building of the Library of Congress opens to the public

The Library of Congress has a history of losing large portions of its collection in fires. The first was after the War of 1812, when the Capitol building was burned down. Thomas Jefferson, half benevolent and half in need of funds, sold the majority of his home library to Congress as a foundation for their new collection. Less than 50 years later, the library lost two thirds of its collection again, over 30,000 books, in another fire. After another half-century of ups and downs in both leadership and goals, a separate building, outside the Capitol, was funded and opened across the street. Since then, there have been three additional locations built in the greater Washington, DC area.

1938: Seabiscuit wins the Match of the Century

Undersized Seabiscuit and his jockey George Woolf won at Pimlico against War Admiral while 40 million people listened in over the radio. While Seabiscuit had won a couple races, he was much smaller and didn’t have War Admiral’s speed from the gate. The upset led to Seabiscuit being named American Horse of the Year, and being the biggest news subjectopens a new window in 1938.

The Motion Picture Association of America has a long and sordid history of dealing with public perception of movies made and released in the United States, and what they and outside organizations agree are acceptable for certain people. The Motion Picture Production Code, which preceded it, was Hollywood-sanctioned censorship. Many of the things restricted in movies (not even their viewing—their production) were understandable, but others were pretty ridiculous, even for the time period. Once people started figuring out ways around the Code, the current system was put into development. This film rating system, which includes G (general audiences), M (mature audiences), R (restricted), and X (explicit content), has only really changed based on public perception of certain themes and language, as well as the addition of in-between ratings. Not to mention, they finally got rid of the X.

Our Opposing Viewpoints in Context database is a great way to explore more facts and opinions on how, and how effectively, this system currently works. (That's also a great research tool whenever you're curious to explore more than one side of a controversial issue!)

1992: The Maastricht Treaty goes into effect

As normal as it seems now, the European Union is only a little over 25 years old. The Treaty on European Union was signed on February 2, 1992, and went into effect on this day of the same year. It  had long since been a goal to unite the European governments economically, and to create a single European currency: the euro. This treaty allowed for easier travel and trade between countries, and a better international standing as a united government—though countries still govern themselves, providing them something similar to States Rights.

If you're curious to explore the current news coverage of the Brexit vote and what that means to the future of Great Britain and the EU, this Opposing Viewpoints in Context search will give you lots to mull over!

November 1 is a big day in history. What event are you most fascinated by?